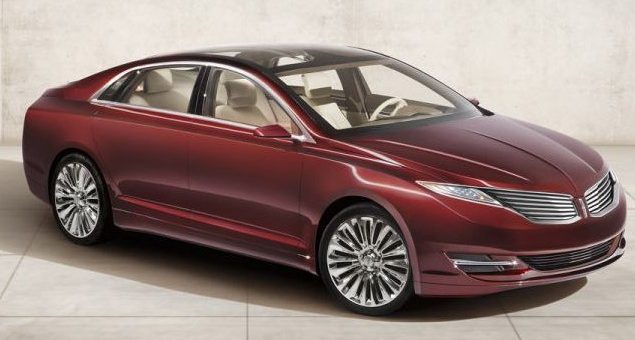 For the last few years, has been quiet, if not comatose. But at the 2012 North American International Auto Show, there was a pulse. And to show the world how committed the brand is to getting back on track (or becoming more competitive), it revealed the Lincoln MKZ concept — though we will use the term “concept” very loosely. Like its cousin, the Ford Fusion, the MKZ is up for a redesign, and the new MKZ shows us pretty much exactly where the car and the brand are headed.

What we see is a restyled MKZ inside and out, with the exterior taking a more outspoken approach compared to the current model, while the interior is filled with elegance. Nobody said a luxury carmaker needed an retractable rear spoiler, or a blue leather interior and carbon fiber paneling to earn respect. We’re fans of the redesign. It’s elegant, it’s tasteful, and it’s sharp. Though since this is only the concept model, there will most likely be some watering down done to the actual model when it comes out soon for production. Hopefully the water down is kept to a minimum.

From a dimensional standpoint, the new MKZ has grown longer, wider and more spacious on the inside than the outgoing model, which has been the trend for new cars being introduced in the segment. Design-wise, the rear fascia may not be as striking as the front, but its shape reminds us of something that would come out of Germany, and is tastefully modern. We also notice that the exhaust seems tucked away nicely behind the rear bumper with chrome inserts around the muffler tip. Up front, the MKZ’s old waterfall grille is dismissed and replaced with a more winged approach, while seamlessly integrating the headlamps.

Another interesting feature is a glass top roof for this model, which will be very enjoyable for all those sitting inside the cabin. The futuristic center console features a touch-sensitive 8-inch LCD screen, while the center console is also graced with touch-sensitive tech where buttons and knobs would otherwise be. The gauge cluster is highly digital as well. As expected, Sync and MyLincoln touch are also accounted for, as is an incredibly plush-looking steering wheel.

Unfortunately, Ford Motor Company is currently mute on just what we can expect under the hood, aside from the mechanics of  Lincoln Drive Control and Continuously Controlled Damping adjustable suspension, currently featured in the larger MKT and MKS.

“With the Lincoln MKZ Concept, we are not introducing a new car. We are essentially introducing a new brand,” said Derrick Kuzak, Ford Motor Company group vice president for Global Product Development. “The MKZ Concept is the next step in the reinvention of Lincoln, something we’ve been quietly but aggressively pursuing.”

“The MKZ Concept’s shape is a vision of simplicity completed with just a few strokes,” said Max Wolff, Lincoln design director. “Our movement as a brand is toward something we call elegant simplicity. It’s something warmer and more restrained, which is moving away from complex designs and traditional luxury.” (View a video highlighting the main design elements of the Lincoln MKZ Concept here.)

Warm hues are evident in every aspect of the new vehicle’s Cognac-colored exterior. The deep finish is achieved with a rich base coat covered in multiple layers of tinted clear-coat finishes.

By retaining key, recognizable brand design elements, the MKZ Concept remains clearly identifiable as a Lincoln. One example is the more refined interpretation of the split-wing grille, introduced on the 1938 Lincoln-Zephyr. (Click here for image.)

The sedan’s profile is dominated by a long, sleek and sweeping roofline that allows the design to break away from the traditional sedan three-box shape. The lengthening of the roofline enables a more flowing, elegant and more naturally aerodynamic appearance. (Access Lincoln MKZ Concept specifications here.)

A panoramic glass roof spans uninterrupted from the windshield to the top of the backlight. Integrated into the sedan’s aluminum and boron steel superstructure, the fixed-glass expanse extends to the side roof rails of the cabin, creating an airy, open interior. (Click here for gallery.)

LED technology enabled an extremely thin and distinctive full-width taillamp graphic. Exhaust tips are cleanly integrated into the rear fascia.
Lincoln MKZ Concept: Interior
The Lincoln MKZ Concept’s four-seat interior is open, warm and inviting. “The front graphic is repeated in the dramatic sweep of the instrument panel, helping tie the interior to the exterior. These flowing forms create a comfortable and functional interior that particularly appeals to the younger, more diverse customers we are targeting,” said Wolff.

Responsibly harvested poplar wood, aluminum in bright and satin finishes as well as leather help create a sculptural, luxurious and comfortable interior space. Champagne-colored leather seats with dark taupe accents feature a champagne perforation pattern, so-called because the perforations on the seat backs conjure the image of champagne bubbles rising from the bottom of a glass.

Like the recently introduced MKS and MKT with EcoBoost™, the Lincoln MKZ Concept features Lincoln Drive Control and the sophisticated Continuously Controlled Damping (CCD) adjustable suspension. (Click here for information on these Lincoln technologies and here for background on the Lane Keeping System, another feature integrated into the MKZ Concept.)

The Business of Lincoln
“Lincoln is an important part of our company’s success,” said Mark Fields, Ford Motor Company president of The Americas. “The luxury piece of the industry is significant. In any given year in the U.S., the luxury segment is 11 to 13 percent of overall sales, and it is important for us to win customers in the luxury market with strong new vehicles. That is a key reason we have invested so heavily in Lincoln.”

During the past 14 months, Lincoln has built a dedicated team – including designers, engineers, quality and manufacturing experts as well as marketing and sales leaders. The team includes people from luxury brands, some outside of automotive.

“This team wakes up every morning thinking about Lincoln – and only Lincoln,” Fields said. “These are the people committed to delivering world-class vehicles with a customer experience to match.”

Many of the new team members begin working this year in the all-new Lincoln Design Studio in Dearborn, Mich.
Under Wolff’s direction, construction of the 40,000-square-foot studio began in early 2011 and ultimately will house more than 180 modelers, engineers, stylists and designers in a space that encourages creativity and collaboration.

“This is the first time Lincoln has had its own studio since the 1970s,” said Wolff. “Having our own space is critical to the continued development of the brand. We are passionate about creating beautiful, even seductive, vehicles – and the MKZ Concept marks just the beginning.”