Thursday August 29, 2013 will be remembered in history as the first day that Ford Motor Company began building the Ford Fusion in the United States. The automaker commenced production of the second-generation Fusion at its Flat Rock Assembly Plant, some 20 miles from its global headquarters in Dearborn, and some 25 miles from downtown Detroit.

The U.S.-based production of the popular Fusion is a winning proposition for all parties involved, including customers, employees and dealers, increasing Fusion availability by over 30 percent, or up to 350,000 units annually. The increased production output comes on the heels of the new Fusion setting sales records for The Blue Oval, with sales of the midsize sedan up 13 percent through July of 2013 in the United States.

A favorable byproduct of Ford’s manufacturing the Fusion in the U.S. is the hiring of 1,400 new employees to support the added production at the Flat Rock plant. The new hires place Ford’s goal of creating 12,000 hourly jobs in the United States by 2015 75% of the way to completion. In fact, Ford is hiring nearly 6,500 new hourly and salaried employees in the U.S. in 2013 alone to support products, growth and investment.

To produce the Fusion at Flat Rock, Ford invested $555 million into the plant to add a state-of-the-art, fully flexible body shop to allow multiple models to be produced on the same assembly line, thereby supporting Ford’s flexible manufacturing efforts. The Blue Oval also upgraded the paint shop with installation of its three-wet paint process, which is more environmentally friendly and takes less time than conventional paint processes, without compromising vehicle paint quality or durability.

Having been producing vehicles since 1987, the Flat Rock facility first opened as Mazda Motor Manufacturing USA, when it built the Mazda MX-6. In 1992, Ford purchased a 50 percent share in the facility, and the plant was renamed AutoAlliance International. Over the years, the plant has produced the Mazda 626, Mazda6, Mercury Cougar, Ford Probe, and the Ford Mustang.

Besides its new line at Flat Rock Assembly, the Ford Fusion is also produced at Ford’s Hermosillo Assembly Plant in Mexico, along with the Chongqing Assembly Plant 1 in China, where the Fusion is known as the Ford Mondeo.

This truly seems like a win-win for all parties involved. Customers and dealers will be able to get their hands on the highly-desired all-new Fusion faster, Ford will sell more vehicles due to the increased supply of the vaunted sedan, and a whopping 1,400 people will get jobs.

Welcome to the U.S.-made party, Fusion. In no time, you will be celebrating your millionth unit out of Flat Rock. 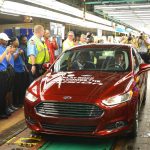 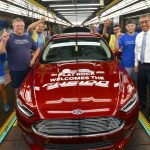 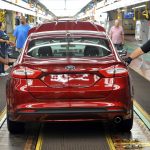 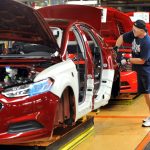