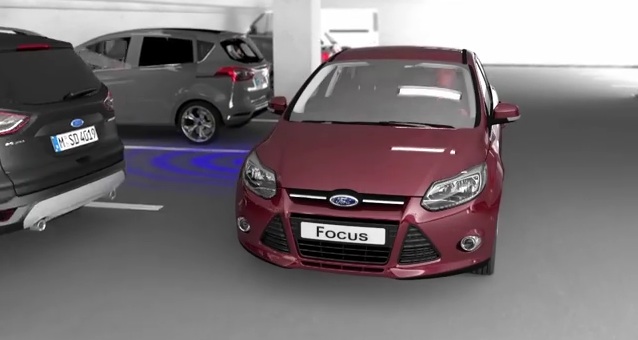 At an early October media event in Belgium, Ford showed off two new autonomous technologies: a fully-autonomous parking system and a collision-avoidance system that can actively maneuver the vehicle around obstacles.

Both technologies stem from Ford’s involvement in interactIVe (Accident Avoidance by Active Intervention of Intelligent Vehicles) — a European think tank consisting of other auto manufacturers and research institutes that’s committed to developing safety technology of the future.

The parking solution can be thought of as an evolution of Ford’s Active Park Assist feature currently available on several of the automaker’s models.

Currently, Active Park Assist has the ability to steer and modulate the throttle of a vehicle to park in perpendicular or parallel spaces, with the driver required to brake the vehicle and shift between Drive to Reverse. The experimental Fully Assisted Parking Aid, on the other hand, is capable of managing all of the vehicle’s systems, including throttle, brakes, steering, and even gearchanges. Watch it in action in this video:

Fully Assisted Parking Aid scans for acceptable spaces as the driver drives past parking areas. When a suitable spot is recognized, the vehicle alerts the driver, who initiates the system. From there, Fully Assisted Parking can do the rest, allowing the driver to exit the vehicle, and then push and hold a button on the key fob. Doing so allows the car to navigate into the previously-identified space. Given that the feature doesn’t need the driver to be present in the car, to park itself, it is especially useful when parking in very tight spaces. And when it’s time to leave, the system also allow the car to drive itself out of a space without the driver.

Notably, Audi demonstrated a similar system at the 2013 Consumer Electronics Show. Audi’s setup also doesn’t require human interaction and parks the vehicle itself, but is different in that it does not need the driver to be present to find a spot. Audi’s system can also pilot a driver-less car into parking structures or parking lots equipped with Wi-Fi to find a spot by itself. Here’s to hoping that the folks at the Blue Oval can match or improve on these futures with Fully Assisted Parking Aid.

Unlike the Fully Assisted Parking Aid system, which is an improvement of a current feature, Obstacle Avoidance is all-new. The system makes use of three radar sensors, ultrasonic sensors, and a camera to scan as far as 650 feet ahead of the vehicle to detect obstacles.

When an obstacle is detected, and the system predicts that the vehicle is going to hit it, a warning chime is activated in the cabin. If the audible warning is neglected, Obstacle Avoidance intervenes by slowing/stopping and/or steering the vehicle around the obstacle while ensuring nothing is in the car’s blind spot or on either side of the object ahead. Like so:

Ford competitor Nissan recently showed off a similar automated emergency-steering system. Ford expects to present the results of the project by the end of the year.

Both of these systems represent the state-of-the-art in automotive safety, and we commend Ford for developing them. As far as real-world deployment of each system goes, it’s easy to see the updated self-parking system implemented into full-scale production cars in the very near future. The obstacle avoidance system, however, seems like an entirely different story.

For starters, such systems need to first meet safety regulations — which are, as a whole, non existent for this kind of automated technology. Second, there are many scenarios in which we wonder how the system will behave. For instance, if the system avoids one obstacle, it’s imperative that it doesn’t steer the car and its passengers into another one that may be potentially more dangerous than the first.

Ultimately, we still believe that every driver should be fully capable of parking and safely driving their vehicle(s) while paying full attention to the road. Unfortunately, distractions, technology, automakers’ desire to increase profits via high-tech options, and pure laziness on the part of general consumers is steering us to vehicle automation.