A recent Ford news release said it best: “no Ford Mustang engine lineup would be complete without a great V8 engine at its core.”

Ford gave the 2015 Mustang GT’s 5.0 liter “Coyote” V8 a host of upgrades, allowing it to breathe better, thereby making an already-great engine even better. The improvements, many of which are derived from the lessons learned in developing the special-edition 2013 Mustang Boss 302, allow for better breathing, especially at higher engine speeds.

Naturally, getting air into the cylinders and exhaust out is key to generating more power and torque from any engine, and that’s what Ford focused on. Revisions to the five-oh consist of: 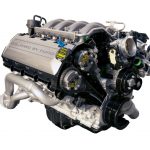 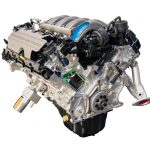 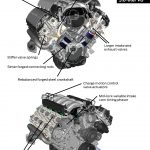 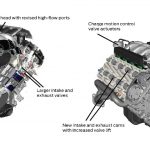 On the intake side, variable camshaft timing now has a greater range of adjustment available due to mid-lock phasers. This enables better optimized control of the valve timing over a broader range of engine speeds and loads for improved fuel economy and emissions.

All in all, Ford expects the upgrades to the already highly-potent 5.0 liter Coyote V8 to generate over 420 horsepower and 390 lb.-ft. of torque, which is the current rating of the engine in the 2013-2014 Mustang GT. But something tells us that the horsepower number will be closer to the 450 number, and that fuel economy will either remain the same or improve by a single point across all measurements. Notably, direct injection remains mysteriously absent from the five-oh.