As you may already know, Ford will offer the 2015 Mustang with its new 2.3 liter EcoBoost inline four cylinder engine. With over 305 horsepower and 300 lb.-ft. of torque, the boosted inline four seems to be the perfect motor for those looking for outstanding performance while attaining projected best-in-class fuel efficiency, thereby fitting the bill for being “a true Mustang powerplant”, according to Ford.

Ford says that the newest member of the EcoBoost family has been “developed specifically for Mustang”, with the engine’s intake manifold and turbocharger housing being optimized to provide better breathing and higher output than in other vehicles in which the engine is available, such as the 2015 Lincoln MKC.

As with Ford’s other EcoBoost motors, the 2.3 liter utilizes state-of-the-art technologies such as direct fuel injection, twin independent variable camshaft timing, and turbocharging to produce big-engine power and torque while improving fuel efficiency. The 2.3 liter EcoBoost is also the first Ford engine to take advantage of a low-inertia twin-scroll turbocharger (as supplied by Honeywell) for quicker boost response, lower emissions, and improved efficiency. 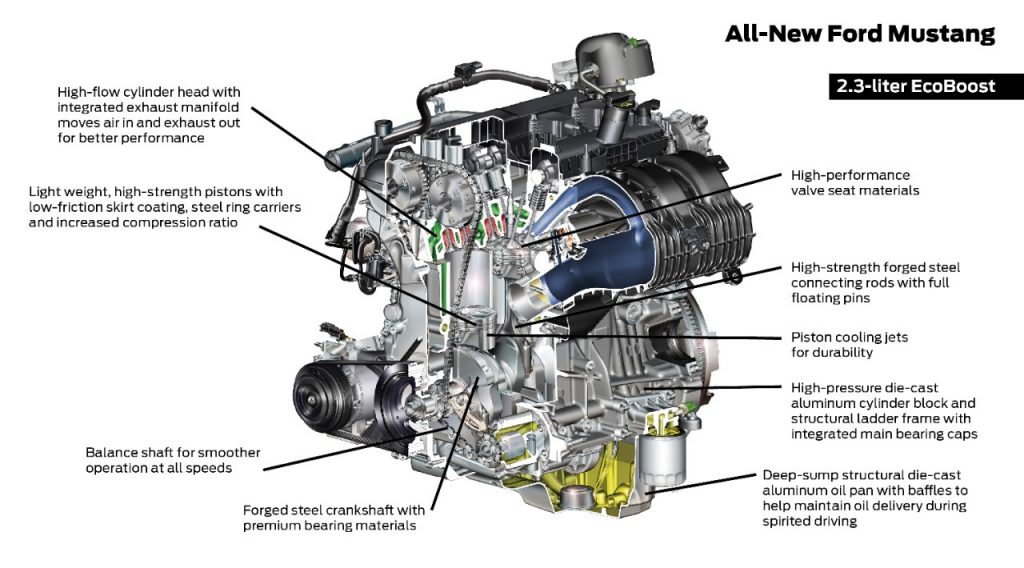 Another unique element of the 2.3 liter EcoBoost mill is that its cylinder head has an integrated exhaust manifold that separates the inner and outer pairs of cylinders into individual inlet passage to the turbo. Separating the exhaust pulses from the next cylinder in the firing order eliminates mixing losses and maximizes pulse energy to the turbine wheel, providing quicker torque delivery when the driver needs it. The benefit of setup will be noticed during passing maneuvers, where it provides similar performance to a twin-turbocharger configuration. Additionally, the separated exhaust ports also enable the exhaust valves to stay open longer, resulting in reduced pumping losses and an improvement in specific fuel consumption by about 1 percent.

Such power in a car where drivers are more likely to use it requires the need to ensure durability. To that end, engineers made the following enhancements to the Mustang’s EcoBoost engine to withstand the added stresses:

Ford’s new 2.3 liter EcoBoost in the new Mustang sure sounds like one well-engineered, powerful, and reliable engine that circumvents many of the issues typically associated with turbocharged engines. Of course, we won’t know for sure until we drive the new pony ourselves, but something tells us that we’re right.