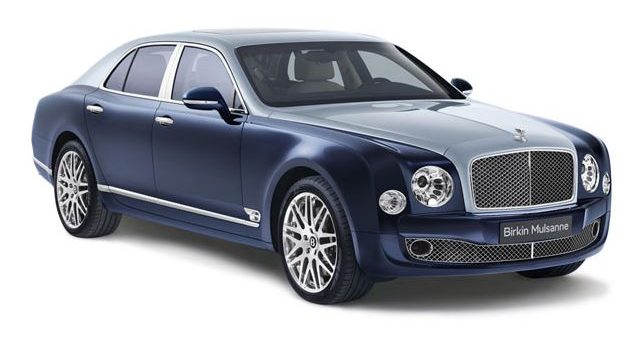 Dr. Wolfgang Schreiber hadn’t had the wraps off of the new Continental GT V8 S for too long before Bentley made another big announcement: a special Birkin edition of its flagship Mulsanne set for release later this year.

Named after Sir Henry Tim Birkin, one of the legendary Bentley Boys of the 1920s and 30s, the Mulsanne Birkin Edition upgrades Bentley’s four-wheeled yacht with some unique touches. Available in Ghost White, Damson Burgundy, or a two-tone Fountain Blue and Dark Sapphire paint job, the Birkin Mulsanne features unique 21-inch wheels, special tread plates, and unique Flying B logos stitched into the headrests as well as inlaid into the dashboard and rear tables.

Bentley hasn’t announced pricing for the special Europe-only model, but you can be sure it won’t be more than the queen can afford, though far out of reach of most commoners. Each of the 22 vehicles to be made will also be equipped with a custom luggage set and include the optional Mulliner Driving Specification, which delivers an engaging motoring experience thanks to a unique ‘Sport’ setting on the Drive Dynamics Control system, as well as upgraded entertainment system with twin 8-inch LCDs in the seatbacks, DVD player, Wi-Fi hotspot, Naim audio system, and integrated iPads.