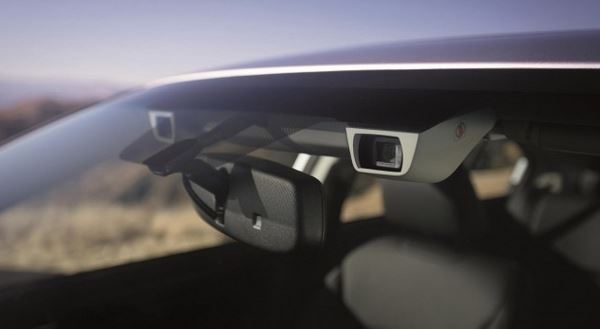 Subaru America have revealed their new and improved Eyesight driver assist technology, which is a marked improvement on a system already worthy of being awarded the Insurance Institute of Highway Safety’s (IIHS) highest rating.

The previous system, which has been on sale in the US for almost two years, is considered impressive technology by both consumers and critics alike. Over 50% of Subaru owners who use the system claimed Eyesight has assisted in avoiding a potential accident, and 90% of the consumer base would recommend the system.

What does the new Eyesight technology offer?

Firstly, the system housing, which sits on the uppermost edge of the windshield has been made 15% smaller by Subaru. Don’t let the smaller housing fool you, as the two new Eyesight color stereo cameras have a longer and wider range of detection – a 40% increase. The computer receiving the detection signals is wired through to the electronic throttle control and the car’s braking system. Furthermore, the stereo imagery processed by Eyesight has the ability to identify obstacles, objects, vehicles and traffic lanes in front of the Subaru. In fact, when circumstances require, Eyesight has the ability to avoid collision through bringing the car to a stop.

Small features such as lane-detection, which alerts the driver when changing lanes unintentionally, and Adaptive Cruise Control, keeping drivers at a safe distance from cars ahead of them on the highway whilst adjusting speeds accordingly, are many of the extras which make this new Subaru Eyesight system great.

Usability is another key. When drivers take their Subaru off-road, the technology can be temporarily disabled. Also, by activating the turn signal, drivers can manually correct the lane-detection system. Little features which improve usability are one of the reasons nine out of ten users recommend the Eyesight technology.

Subaru are already looking ahead to their 2015 models and are planning to add more new technologies to the mix. Included is Blind Spot Detection (senses oncoming vehicles and flashes light when unsafe to change lanes), Lane Change Assist (with a range of 230 ft, warns drivers about fast-approaching vehicles) and Rear Cross Traffic Alert (useful in parking lots and driveways to detect approaching vehicles within 23 ft of the car and alerts driver via dashboard light). With these upgrades scheduled, Subaru looks a sure bet to maintain its place atop driver safety.

Subaru, however, maintain to stress the following. Drivers, whilst promoting safety and ease-of-use in their vehicle selection, must also understand the effectiveness of good judgment and awareness when behind the wheel. Subaru has developed the new Eyesight driver assistance to do just that – assist drivers and aid road safety. And by all accounts, are doing a stellar job.

Look for the new Eyesight system to debut in 2015 model-year Subaru vehicles, such as the 2015 Subaru WRX STI.