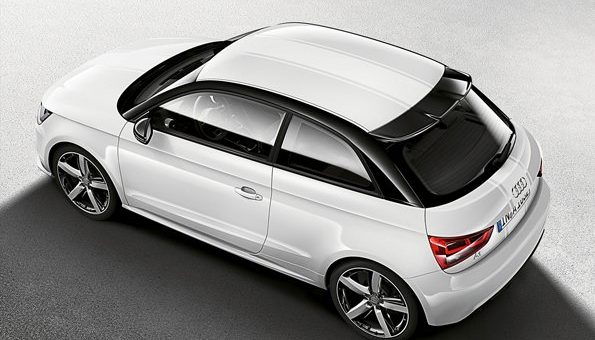 Audi first entertained the idea of a sporty A1-based hot hatchback when they unveiled the wild 500 horsepower A1 Clubsport Quattro at the 2011 Worthersee Tour in Austria. Since then, spy photographers have caught S1 prototypes out on numerous occasions, most recently during winter testing in Sweden.

Motor Authority scooped up the pictures, which show the same general shape as the standard A1 hatchback, except this time with four exhaust outlets as seen on all Audi S-line models.  The photos also show the impending hot hatch crashing head on into a snow bank. Apparently, the driver attempted to speed up to avoid being photographed, resulting in the unfortunate snowy accident.  Both the driver and the car came away unscathed.

A facelifted version of the A1 hatchback, which has been on sale since 2010, is due to make its debut at the Geneva Motor Show in March.  MA says the S1’s development has been delayed so its debut and production schedule coincide with the redesigned A1.

The S1 will have a 230 horsepower, turbocharged 2.0 liter four-cylinder mated to a dual-clutch automatic transmission, according to Auto Express. It’s not yet clear if a manual transmission will be offered. Of course, power will be sent to all four wheels through Audi’s Quattro all-wheel drive system.

Unfortunately, neither the A1 nor the S1 will reach U.S. shores. While reportedly, UK residents can expect the redesigned A1 and all-new S1 to go on sale sometime in May.