Say hello to the 2015 Ford Focus — a midcycle refresh of Ford’s highly-popular third-generation compact car range. Revealed the car at the Mobile World Congress in Barcelona ahead of its official unveiling next week at the Geneva Motor Show, the update brings revisions to the exterior and interior, handling and fuel economy improvements, as well as advanced new safety and infotainment technologies.

On the outside, the already-good-looking Focus features several enhancements, including a restyled hood and grille, along with new lighting for the headlamps and taillamps. Out back, a new rear lamp cluster and a restyled trunk lid round out the changes to the exterior design.

The U.S. will continue receiving the four-door sedan and five-door hatchback models, while European customers will also be able to purchase the five-door wagon variant.

Inside, the 2015 Focus gets new seat trims, switches and an available heated steering wheel. The center console has been redesigned, making a better center storage space that incorporates adjustable cupholders along with a new and easier-to-access glove box.

Although Ford already offers Ford’s award-winning and fast-selling 1.0-liter three-cylinder EcoBoost engine in the Focus sold in European markets as well as in the smaller Fiesta, the automaker is just now adding the engine to the options list for American buyers. Coupled with a six-speed transmission (Ford hasn’t specified whether that’s the automatic or the manual), the new engine will deliver higher fuel efficiency than the model equipped with Ford’s 2.0-liter GDI I4 engine, which will continue to be offered as the base powerplant in the Focus, where it delivers an EPA-estimated 40 MPG on the highway. To note, the 1.0L EcoBoost has been awarded the International Engine of the Year prize for 2012 and 2013.

An Improved Suspension And Chassis

An improved suspension system is comprised of a new shock absorber valve design that provides improved interior quietness, along with a new electronic stability program system that is less intrusive, allowing for improved comfort, as well as a change to the rear suspension to give drivers a more connected feel to the road.

Ford has stuffed the 2015 Focus with a myriad of advanced driver-assist technologies that should make all other compacts jealous.

For starters, a rearview camera will be standard, appearing either on the 4.2- or 8-inch screen that comes with MyFord Touch-equipped vehicles. Furthermore, a Blind Spot Information System (BLIS) and an advanced lane-keeping system are now available as options.

As if all that wasn’t enough, the 2015 Focus will also deliver an improved SYNC AppLink experience — the interface that allows a driver to safely interact with applications running on his or her smartphone while driving by keeping hands on the wheel and eyes on the road. New SYNC AppLink functions include:

The freshened Focus goes on sale in the second half of 2014, and Ford is hoping that the updates will enable the model to continue being the best-selling nameplate in the world.

“We weren’t satisfied with being No. 1; we wanted to blow people away with a stunning new version of the Focus,” said Stephen Odell, president of Ford of Europe, Middle East and Africa. “New Focus marries modern design, advanced technology and leading fuel efficiency with the fun-to-drive DNA for which Focus is rightly acclaimed.”

From what we see here, The Blue Oval will likely remain #1 without with the freshened Focus breaking a sweat. If anything, it will cause the competition (we’re looking at you, 2016 VW Jetta) to step up and match the updated Focus when it comes to styling, driving dynamics, fuel economy, and technology. Who said competition was bad? 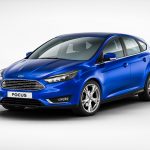 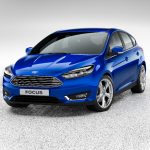 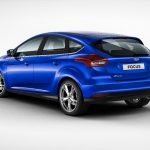