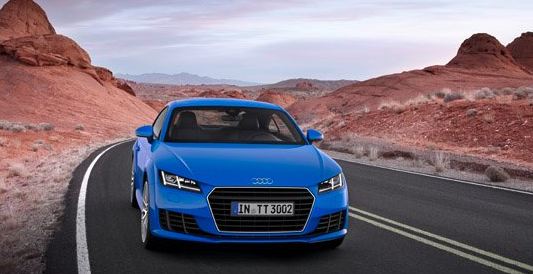 Placed prominently in the midst of the lowliest of hatchbacks to the most outrageous of supercars is the latest 2-seat coupe from the four-ringed German brand shining brightly amongst the crowds of media and dignitaries. Meet the 2015 Audi TT, the third and latest generation of Audi’s dynamic sport coupe.

This newest of sports-cars from Audi has set its eyes on walking in the footsteps of its iconic predecessors but also providing a test-bed for Audi’s best and brightest technologies for mass-market consumption.

Firstly, one notices the revised sheetmetal which retains the original cues of the original TT and brings the spritely machine in line styling-wise with the rest of Audi’s now familiar line-up. Instantly visible is Audi’s iconic hexagonal grille displayed tastefully in conjunction with sleek, full-LED headlights; a trademark shared on all offerings from the marque.

Debuting underneath the TT is Volkswagen’s latest MQB platform; the first of it’s kind to debut on a sports-car from the German Company. Shedding 100 pounds from the total weight compared to the outgoing model is brought about by the addition of lightweight aluminum body panels all around, and an ultra high-strength steel chassis bringing the weight to a feather-like 2712 pounds.

When the latest Audi TT hits the streets later this year, power will come from VW’s legendary turbo-four producing a respectable 230 hp and a rather impressive 273 lb. ft of torque. If left in standard FWD form with a slick-shifting six-speed manual transmission the trip from 0-60 takes 6 seconds dead; while the more expensive “Quattro TT” (read AWD) transmitting power by means of a 6-speed dual clutch, can achieve the same feat in around 5.3 ticks. Even with this inherent lightness and aerodynamic design maximum velocity is limited to an autobahn-friendly 155 mph.

Once seated inside the TT, one notices an markedly high-grade interior affectionately named by the Audi crew “the virtual cockpit” with a standard amount of leather and modern touches. Among these being a fully customizable TFT screen, managing pertinent information to the driver with advanced voice technologies capable of operating nearly all driver requests in the cabin (AC, Navigation etc.).

Pricing has not yet been released by ze Germans, but one can expect a price tag hovering somewhere around the $40,000 mark, similar to that of the outgoing TT model. Future models are sure to include a roadster and mental turbo-five RS coupe, but rumors have been floating around a possible shooting break variant.

For further Geneva news and updates stay tuned to Motrolix.com for more information as the week goes on.