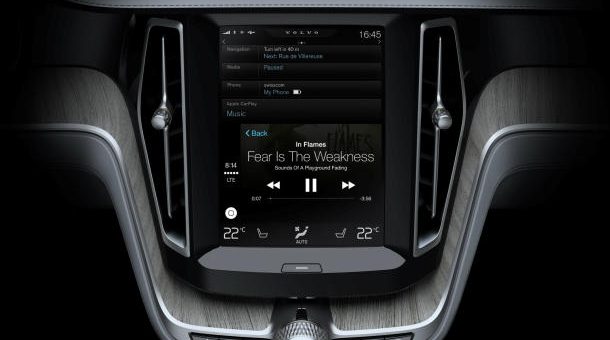 Apple’s new in-car multimedia system, CarPlay, is set to be integrated into a variety of vehicles from several different automotive manufacturers. Among the first of them is Volvo, who will introduce the system in the updated XC90 crossover, which will be introduced later this year.

Apple CarPlay will be used to integrate users’ iPhones into their car’s infotainment system. With a CarPlay enabled iPhone connected to the system, occupants can use Siri or the cars touchscreen to navigate through maps, play music and answer phone calls. The system is designed to provide “minimum distraction” to drivers, according to Apple.

Six automakers will roll out CarPlay into their vehicles in 2014: Ferrari, Honda, Hyundai, Jaguar, Mercedes-Benz, and Volvo. The system is also destined for use in future models from a vast array of manufacturers including BMW, Chevrolet, Ford, Land Rover, Nissan, and Toyota.

The CarPlay touchscreen in the XC90 will show both the applications installed on the users iPhone and Volvo’s own driving content and apps at the same time. The automaker also said Wi-Fi connectivity will be available for the system in the near future.