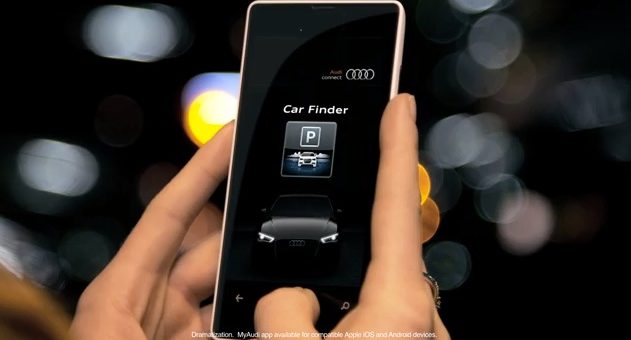 Apps are cool, but apps that let you interact with your car… well, those are even cooler. So you can imagine our reaction when we found out that Audi announced a smartphone app for its all-new 2015 A3. In short, we were like, “cooooooool”!

Called Audi MMI connect App, the app synchs directly with the A3’s available MMI Navigation plus infotainment system to enable new levels of functionality such as sending destinations to the car, streaming music, and finding their car.

“This is the most advanced driver companion app Audi has ever launched,” said Anupam Malhotra, Senior Manager, Connected Vehicles for Audi of America. “The Audi connect Smartphone App features intuitive technology and easy-to-use features that not only increase functionality, but make the ownership experience fun and even more enjoyable.”

Using functionality supported by Google Maps, drivers can search for a destination in advance, send that destination to their car via myAudi, and program it in the MMI Navigation system. The App also allows users to browse contacts or calendar entries for address details and send them to the car.

With Picture destinations, drivers don’t even need an address, since they can simply select any geo-coded picture from an existing picture album on their smartphone, or take a new picture on the spot, and send it to their car. Once in the car, drivers can browse through the photos and navigate to the destination where the photos were taken. The vehicle knows the location where the photo was taken by utilizing the picture’s geographic meta data.

Picture Destinations also makes it very convenient to drive to a friend or family member — friends and family simply send a (geo-coded) picture from their location and the App can be used to upload the image to the vehicle.

When a passenger’s smartphone is connected to the MMI system over the in-car Wi-Fi, it’s possible to access thousands of web radio stations, as well as any music stored on their smartphone. Using the MMI interface, vehicle occupants can browse top stations, select from their favorite radio stations, or go through playlists on their device.

For passengers, the App offers additional functionality including radio station selection by genre, topic, country, or language, as well as free-text searches and storing favorites. These features are available once the smartphone is connected to the MMI system over the available Wi-Fi. The App can also be used outside a vehicle to listen to web-radio (at the home, office, etc.).

Thanks to Car finder, drivers can access their vehicle location through the App. When their smartphone is connected to the in-vehicle Wi-Fi, the MMI® connect App makes a note of where the car is parked, allowing drivers to easily navigate back to it from wherever they might be. The Car finder feature also allows users to take a photo of where they parked, which is stored with their vehicle location, to help recall area markers, garage levels, or other important information.

The Audi MMI connect App is available for download on the iTunes store. Audi says that an Android version will be available in the near future.