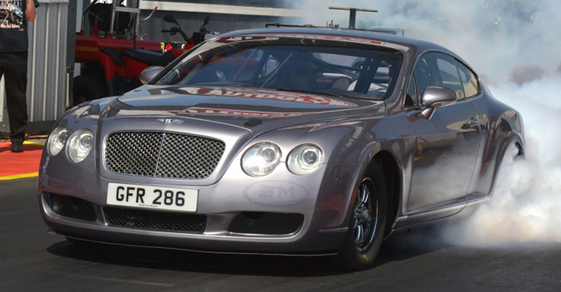 When it comes to drag racing more power is, generally, a pretty good thing. But the definition for “more” gets a little blurry thanks to Webster Engineering out in Bredford, England with their heavily modified Bentley Continental GT dragster. This is a machine capable of producing a scarcely believable (or usable) 3,082 hp. This immense wave of thrust comes courtesy of one monstrous, twin-turbo 10.2L Chevrolet V8 crate motor crammed under the bonnet, catapulting this Continental to the quarter mile in approximately 6 seconds on a set of drag-spec slicks. Not something you would expect from a gentlemanly grand touring car.

If not to add to the insanity of this British brute, this Bentley is actually street legal, competing all across Europe in the Euro Drag Racing Championship for the Street Eliminator Class. But don’t expect the typical interior classiness and refinement Bentley vehicles are known for on the inside, as all that’s left of the original vehicle is the authentic bodywork, with a tubular frame chassis replacing the vehicle’s standard underpinnings. The leather thrones were ditched in favor of carbon shells, windows eschewed for plexi-glass, and noise-deadening materials (not-so) subtly replaced with the sound of ear-shattering thunder. All in the name of speed.

The price for this one-of-a-kind Franken-Bentley you may ask? A pricey total of nearly 250,000 British Pounds (approx. $420,000) and a waiting time totaling 8 months. Well worth the investment if you ask the vehicle’s owner Steve Neimantas. Now let’s just hope he’s got a steady right foot. You can watch the video here.