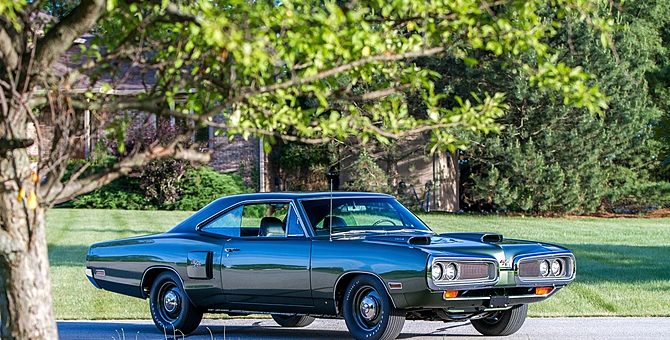 Mecum Auction’s Harrisburg event July 24-26 may not have the panache of Palm Beach or the racing history of Indy, but that doesn’t mean that neat cars won’t be passing through. One car that caught our eye is this 1970 Dodge Coronet R/T with the 426 Hemi motor, but it also serves as a good example that you should read between the lines when going over an auction description.

In 1970, Dodge gave its B-body line a drastic facelift, giving the Coronet series an awkward nose that appeared a bit overstyled and heavy. On the other hand, it does have character, which is why it remains popular in collector circles. Dodge stylists also accentuated the rear flanks with more defined Coke-bottle styling, which was complemented by the new “hockey stick” stripes that were available for the Super Bee. However, the Coronet R/T made do with the traditional “bumblebee” stripe.

In the hierarchy of the Coronet line, Dodge offered the following:

When it came to performance offerings, the Super Bee had a low-grade interior and standard 383/335, while the Coronet R/T was more upscale and came standard with the 440/375. Both had the 440 Six Pack and 426 Hemi available as options. As equipped for the R/T hardtop, only 13 people in the U.S. ordered the Hemi, so this is among the rarest Hemi hardtops built from 1966-71 (to contrast, over 600 Hemi’Cuda hardtops were built the same year). Kinda neat, right? So then let’s see what the seller has to say on Mecum’s site.

Chrysler was funny with its records, so when you see a number thrown out, it possibly is not total production. That number 13 is for U.S.-spec cars only. It is known that one more was built for the Canadian market, but it’s unknown whether any others were exported. Hence, more than 13 were built, and the four 4-speed cars only count for U.S. production.

The Coronet R/T weight WAY more than 3,400 pounds as equipped. Dodge rated the R/T hardtop’s shipping weight at 3,515, which is the weight before driver and fluids are added – an R/T should be a few hundred pounds more. Even the lighter Super Bee tested by High-Performance Cars magazine for a magazine weighed 3700 pounds. As far as Motor Trend is concerned, they must have tested an earlier Hemi car as they didn’t test drive a 1970 Coronet R/T.

These are nit-picks, but the take-away is this: Auction houses don’t do the write-ups (and aren’t liable for such) – the sellers do. And you can never be too sure of what the seller is saying – is (s)he puffing up the car? Is (s)he mistaken about certain “facts?” This Hemi R/T profile is passable, but there’s a lot of misinformed sellers out there. GM Authority writes about a lot of cars headed to auction but we know that we can’t always rely on write-ups . . . and neither should you.