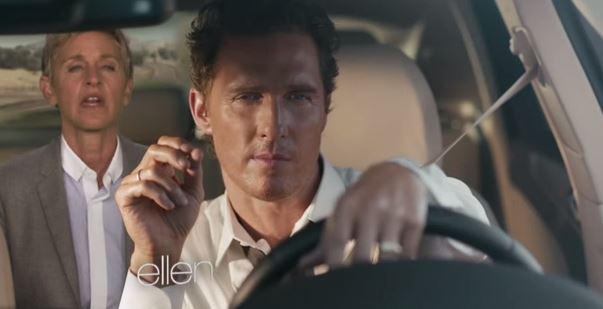 By now, you’ve certainly had to have seen the slew of new 2015 Lincoln MKC advertisements featuring Matthew McConaughey as the spokesperson. One in particular, seems to have struck everyone a bit… odd. As Mr. McConaughey gazes out, a bull blocks his path from reaching his destination. Understandably, we know what the advertisement is aiming to say, but it comes off a tad out there.

Ellen DeGeneres seems to completely share in this feeling, and released a revised version of the commercial where she has superimposed herself into the backseat of the 2015 Lincoln MKC. Munching on some (special) brownies, she asks all the right questions as to what McConaughey is doing behind the wheel of the compact luxury crossover.

The video is definitely worth a watch, and good for a laugh, or two, or a lot because Ellen’s whimsical matter-of-fact style of comedy is just what this advertisement needs. Although the commercial seems to have faired poorly, the 2015 Lincoln MKC has opened to pretty good reviews. We can take that as a win-win, a good vehicle from Lincoln, and an ad campaign that is undoubtably humorous in its own right, without intending to be.

You can watch the spoof below in the video below.