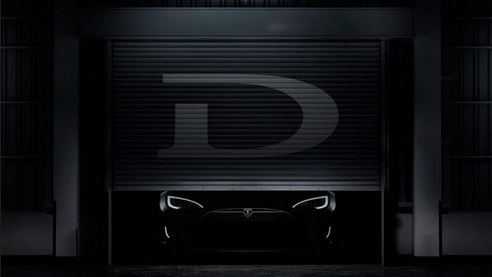 Lately, we’ve all been waiting to see what big, two announcements Tesla CEO Elon Musk claimed he had up his sleeve. You’ll recall there were hints of semi-autonomous cars in Tesla’s future, as well as speculation that the ‘D’-stamped garage door from the CEO’s tweeted picture was hiding an AWD version of the Model S.

Well, we were right on both accounts. Yet we couldn’t have been more wrong.

The “Model D,” for one thing, is not a thing. But “D” is the suffix added to the Model S designations to denote the new dual-motor, AWD system. If you’ll recall, previously there was the Model S with 60 kWh battery, one with an 85 kWh battery, and a performance variant known as the “P85” which used the battery of the latter, with a tremendous 470 HP electric motor.

This remains the case, except that the AWD Model S is now either the “Model S 60D” or “Model S 85D.” Oh, and then there’s the absolutely bonkers “Model S P85D.” More on that one in a minute.

Tesla gave each of the former models a 188 HP electric motor in the front, and one in the rear; that’s about half the power each as the single motor found in the old Model S 85kWh, so they produce roughly the same power.

The Model S P85D, however, shares the same electric motor in the front, while retaining the 470 HP rear motor of the P85, for a combined 691 HP (claimed; the maths are mysterious). This not only maintains a torque-split which preserves the RWD feel of the Model S, but compels the Model S P85D to 60 mph in a scant 3.2 seconds.

And then there are little, routine improvements like an electromechanical brake setup (as found on the Porsche 918, and nothing else), improved range and regeneration thanks to the additional motor, and some other touches.

It uses cameras to read road signs, and sonar to detect traffic and obstacles in all directions. It allows the Model S not only to cruise with traffic, speeding up or slowing down as warranted (even to a complete stop), but the driver can change lanes simply by tugging on the turn indicator stalk. And while Musk had previously stated that the autopilot technology would be coming somewhere around mid-2015, they’ve actually been installing it in every car built over the past two weeks.

All things considered, an AWD Model S? We’d seen that one coming. A sophisticated autopilot system? We had no idea that would be ready to implement so soon. But the Model S P85D, an AWD electric vehicle with 691 HP that, while weighing almost 5000 lbs, can still launch itself to 60 mph in 3.2 seconds?