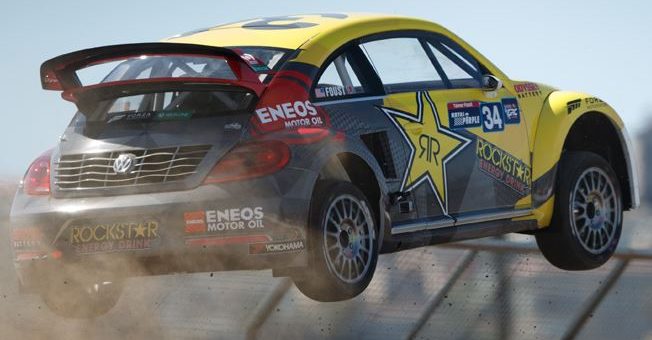 The Volkswagen Andretti Rallycross team heads to Las Vegas for the tenth and final round of the current season. The race will decide the winner of the ten race championship, and will take place November 5th at 10:30pm.

Scott Speed, the driver of the number 77 ‘7UP’ Volkswagen Polo is one of four competing for the top finish. Speed is currently in fourth place, but has more series wins than the other drivers competing.

“I’m excited to head to Las Vegas and feel we have a great chance to win our fourth race this season,” said Speed. “We’re going to push ourselves to the limit, hoping to come out on top of the championship. Regardless of the outcome, it has been a great first year for the Volkswagen Andretti Rallycross team.”

Top Gear USA host Tanner Foust will also be competing in the race on November 5th, and will again be racing the number 34 Rockstar Energy Drink Volkswagen Beetle. He is currently outside of championship contention, but is taking the opportunity to further test the GRC Beetle before its first full season of racing in 2015.

“Having won two out of the last three races in Las Vegas, I enjoy running there,” said Foust. “Historically, the tracks have been good and the backdrop is a perfect place to wrap up the season!”

Red Bull Global Rallycross Las Vegas will take place at The LINQ Hotel and Casino in Las Vegas, NV, from Nov. 4-5. NBC will air the race on Sunday, Nov. 16, at 1:30 p.m. EDT. Follow @VW for live coverage of the event.