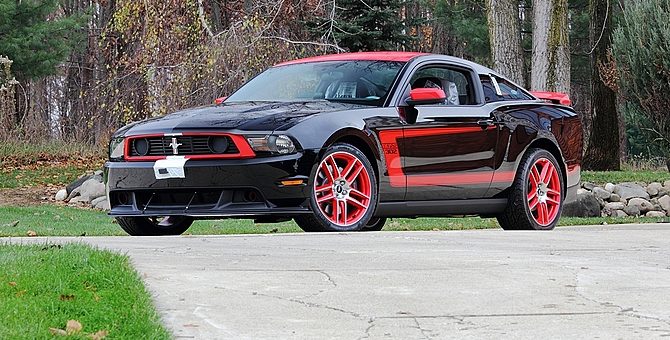 Remember when Ford brought back the Mustang Boss 302 for 2012 and everyone went ga-ga over it? Here was an antiquated Mustang beating BMW. Audi, and Aston Martin, among others, around the track… solid rear axle, and everything. With 444 horsepower, it was also more powerful than the typical Mustang GT. Ford built 3,250 Boss 302s for the 2012 model year, and another 750 were Boss 302 Laguna Seca editions. One of these rare cars will be sold at Mecum Auto Auctions in Kissimmee, Florida on January 16th, 2015.

At the time, Mustang chief engineer Dave Pericak said, “When we built the Boss, we had to step back and ask ourselves ‘How do we improve on this?’ That car is so strong we realized the Laguna Seca package was going to have to be just a fraction of a step back from the Ford Racing 302R to top it. So we went back and threw daily-driver practicality out the window, cut some things we couldn’t cut on the volume model, like the back seat, and built it the way we would set up a production Boss for pure competition.”

The Boss 302 Laguna Seca made a return for 2013, but the one that collectors lust after is the inaugural 2012. With only 15 miles on the odometer, this 2012 Boss 302 Laguna Seca from the Macchia Collection is unlikely to hit the racetrack with its new owner… unless said owner is somewhat of a sadist. But even if you were that cruel to track what is certainly a future classic, then we should say that the Boss 302 Laguna Seca would be more than capable of holding its when in capable hands.