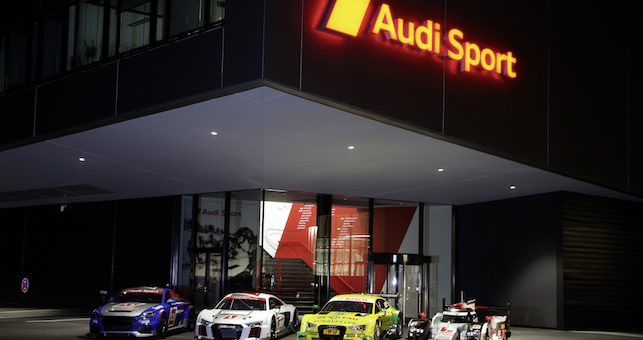 Audi Sport officially kicked off their 2015 racing season with a warm-up test at the company’s new Motorsport Competence Center Thursday. The small event marked the first time in which Audi’s four racing programs, running in LMP, DTM, GT racing and the Audi Sport TT Cup, appeared in the same place at the same time.

One of Audi’s most famous and most successful racing ventures, its FIA World Endurance Championship program, has been thoroughly rethought for 2015. The Audi R18 e-tron Quattro has received an updated design and was debuted for the first time at the pre-season warm ups in Neuberg last week.

“We focused on various areas this year so that Audi’s hybrid sports car will remain unbeaten at Le Mans for the fourth consecutive year,” said Head of LMP racing at Audi Sport, Chris Reinke.

Audi’s RS5 DTM racecar will remain unchanged this year, as per the series’ homologation rules. Over the winter break, the team “concentrated on tapping existing potential and on paying attention to even the smallest detail,” on the car, said Audi’s DTM head Dieter Gass.

Joining the RS5 DTM and R18 e-tron in Audi Sport’s garage will be the new R8 LMS Ultra, which debuted at the Geneva Motor Show earlier this month. Two teams, Phoenix Racing and WRT, wil field a new R8 LMS at the 24-hour races at the Nürburgring and Spa-Francorchamps later this year.

Audi’s new one-make race series, the Audi Sport TT Cup, will also celebrate its inaugural season in 2015. The automaker saus response to the racing program, which will hold its first event at the DTM Festival at Hockenheim, has been “overwhelming.”

“We have a lot on our agenda for this year,” said Audi Motorsport boss Dr. Wolfgang Ullrich. “Here at the new Competence Center Motorsport in Neuburg we’ve created perfect prerequisites for this. We all feel comfortable in the new facilities. Particularly in the past weeks when the assembly of the race cars for the 2015 season began, the mechanics of Audi Sport and our partner teams came to appreciate the significance of optimum working conditions.”