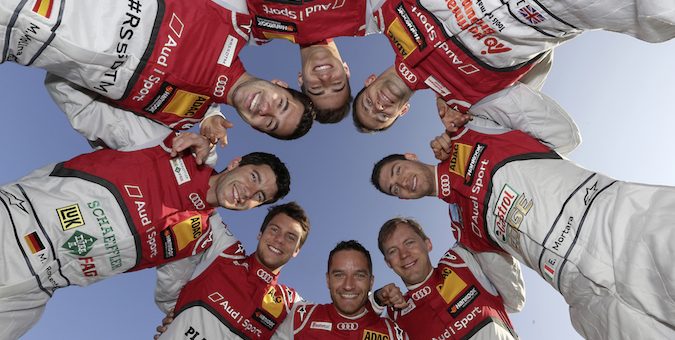 Audi’s eight RS 5 DTM racecars are ready to hit the track at Hockenheim this weekend after the series’ 195 day winter hiatus. The season opening DTM Festival at Hockenheim will be host to races on both Saturday and one Sunday, making it the first track to test DTM’s new double header weekend format for 2015.

For 2015, much of the DTM technology and regulations have remained the same. However Audi says they worked on minute details over the winter, attempting to fine tune their setup while remaining within the rules.

DTM isn’t the only even Audi Sport has to look forward to at Hockenheim this weekend. The track is also hosting the world debut of the automaker’s new one-make racing series, the Audi Sport TT Cup, along with the FIA World Rallycross Championship for the first time.

“ I really look forward to the Saturday at Hockenheim and the first qualifying session every year,” said Sweidsh Audi DTM driver Mattias Ekström. “Hockenheim with the DTM, TT Cup and Rallycross on a single weekend is a rare opportunity this year and as a fan I’d be sure not to miss out on it.”