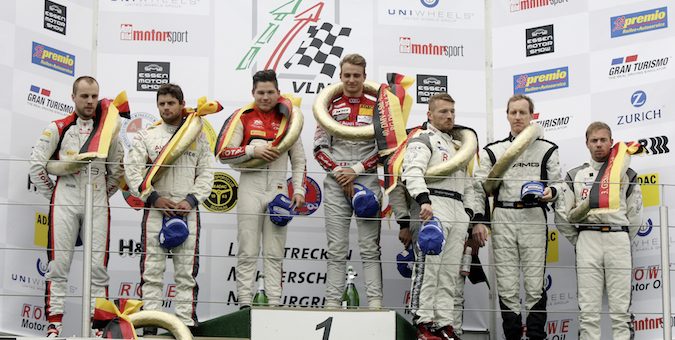 Audi Sport Team WRT managed to drive to a dominating 1-2 finish in the 4-Stunden-Rennen VLN Enudrance Championship race at the Nurburgring. Christopher Mies and Nico Müller raced to an overall win in the 4-hour event, followed by teammates mates Pierre Kaffer and Laurens Vanthoor, giving the R8 LMS a win in its third race so far.

Mies and Muller had moved into first place after 10 laps of the daunting Nordschleife circuit, but found themselves swapping position with Mercedes. By Lap 18 they had reclaimed the top position and put a solid gap between them and the car in second, eventually crossing the finish line 1 minute and 27 seconds ahead of Vanthoor and Kaffer.

“I’m absolutely delighted, because it was a nail-biting race. We started on rain tires, changed to slicks and before changing back to wet tires later on,” Mies said post-race. “The new Audi R8 LMS was easy to drive in both wet and dry conditions. We have also made progress on the suspension set-up. This was the key to victory today.”

Audi has been testing the new R8 LMS GT3 since last spring and is using this year’s races as its test bed for the car before it’s delivered to Audi Sport customers. The automaker says “the goal is to be able to supply a winning racecar to our Audi customer teams by the end of the year, and to convince many teams to choose an Audi.”