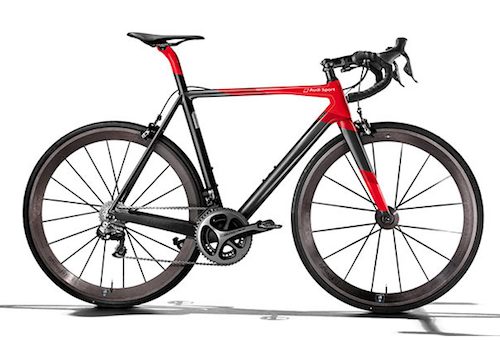 Automakers often share carbon fiber suppliers with manufacturers of high end road racing bikes, but now Audi has decided to become a bicycle manufacturer of its own. The Ingolstadt based automaker has taken a step away from focusing on cars for just a moment to bring us the new Audi Sport Racing Bike.

The bike’s frame is made from high strength carbon fiber and weighs just 790 grams, with the whole bike, wheels and all, tipping the scales at just 5.9 Kg (13 lbs). It also comes with a carbon fiber seat wrapped in fine Napa leather used in production of the R8 supercar, and will be limited to just 50 units.

Audi’s racing bike is essentially the two-wheeled, human powered equivalent of a supercar. It’s extremely light and stiff thanks to the use of carbon fiber in its construction, and it will be limited in its production. Also like a supercar, it carries a stratospheric asking price of $19,000.

So if you already own a V10 Audi R8 and were looking into joining the local gym for little extra exercise, why not get your car’s two-wheeled counterpart instead?