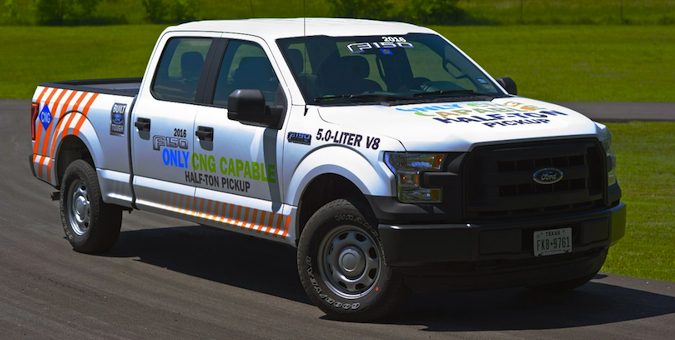 Ford has announced it will offer the 2016 F-150 with an available CNG/Propane fuel preparation package, converting the truck’s gasoline 5.0-liter V8 into a low-cost compressed natural gas or propane burning motor. Ford says trucks running on CNG or propane will be able to tow the same amount as they would be able to if they were running on gas and thanks to the updated F-150s weight savings, can tow hundreds of pounds more than a gas 2014 model.

The fuel prep package, which will available to order when 2016 models go on sale this summer, will come with upgraded intake and exhaust valves and valve seats to accommodate the use of alternate fuels. The CNG/propane prep coscts $315, however they then must pay a Ford Qualified Vehicle Modifier to install the necessary fuel tanks, fuel lines and different fuel injectors, which can cost between approximately $7,500 to $9,500.

According to Ford, CNG/propane powered vehicles are becoming increasingly popular among fleet buyers. The automaker sold a record a record 16,821 commercial vehicles with CNG/propane engine-prep packages last year, and says 2015 is shaping up to be even stronger. It’s not hard to see why, as CNG conversions can lower operating costs for fleet managers significantly, with prices being as low as $1 per gallon of gasoline equivalent in some parts of the country.