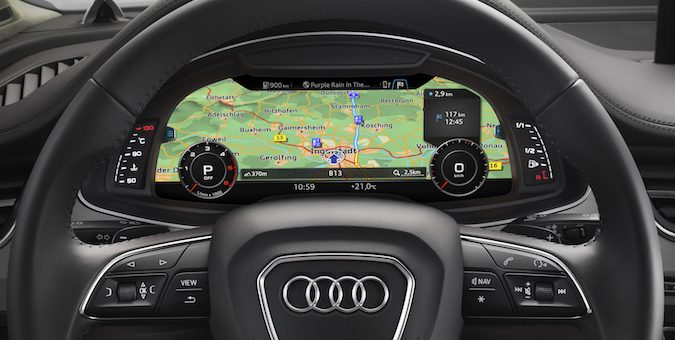 From its laser headlights to its virtual cockpit dashboard and tech-intensive Prologue concepts, it’s no secret that Audi believes electronics in automobiles are the way of the future. They confirmed this believe when speaking to Bloomberg at CES Asia last week, telling the publication the technology to be available in cars by as early as 2020 will “totally change our industry and our (Audi’s) offering.”

Last year, VW employed a team of employees to work solely on the adaptation and integration of technology in automobiles. We’ve seen the results in all the different technologies the automaker has released in the past year, the latest of which is its ‘Car-Net’ app for Apple and Android devices, which will pair the car to the user’s smartphone or Apple watch.

“By 2020, 50 per cent of value creation will be based on apps, software, electronic systems and digital services,” Audi sales chief Luca de Meo told Bloomberg, adding the possibilities for such systems are “endless.”

Also at the forefront of Audi technology is its self-driving system and A7 piloted driving concept. At CES Asia, the automaker was offering rides around Shanghai to media to showcase the capabilities of the tech. At CES Las Vegas, a group of journalists were also ushered to the event from San Francisco in a piloted driving concept.

In addition to these technologies, Audi also announced its smartphone pairing system for China in partnership with web company Baidu, and presented gesture-operated tablets for its already tech-heavy Q7 full-size SUV at CES Asia.

“Never before in nearly 130 years of automotive history has our industry changed as fast and as completely as now” How we engineer our cars, how we produce them, how we present a new model, where we sell it, who we sell our cars to and who we work with in the future,” said Audi chief executive Rupert Stadler.