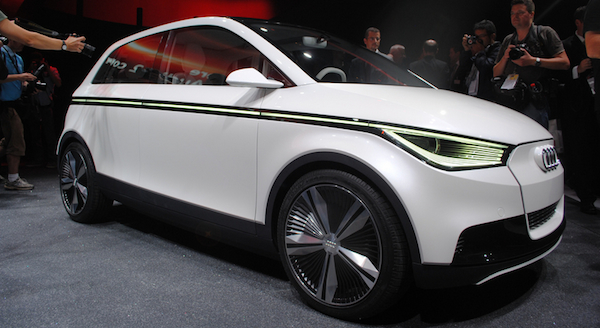 Audi first hinted at the potential return of its now discontinued A2 subcompact when it pulled the wraps off of the A2 concept e-tron at the Frankfurt Motor Show in 2011. The automaker has been mum on the matter ever since, but according to a new report from Automobile, an all-new A2 could be poised for a debut at the 2016 Paris Motor Show.

Automobile says the new Audi subcompact will be available in two- and four-door varaitions and may ride on a small version of Volkswagen Group’s MQB platform as opposed to the NSF platform which sits underneath the budget-minded VW Up! Powering the car will be a 110 horsepower gasoline three-cylinder engine or a 100 horsepower diesel.

Considering BMW is offering an all-electric version of its i3 city car, an A2 e-tron variant could also join the standard versions of the A2. Automobile says the output of the motor would be either 60-kW or 90-kW and the batter packs would be stored under the front seats and between the rear wheels. Range would likely exceed 25, beating the i3’s claimed battery span.

The A2 has still yet to get the green light, and the version we see in Paris next year will probably just be a concept, but a 2019 or 2020 release date is pegged for the model if it does get the go ahead.