Ford Motor Company has filed a trademark application to register “Figo” as a trademark with the United States Patent and Trademark Office.

The automaker’s May 22th, 2015 application is assigned serial number 86639158 and specifies that the mark will be used for “passenger automobiles and badges”. The filing also states that Figo is Italian slang for “cool”. 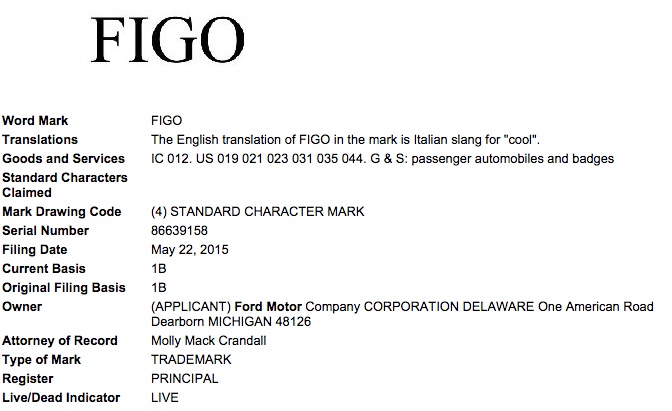 Ford has been selling a vehicle called the Figo in various markets around the world since 2010. Based on the fifth-generation Ford Fiesta, the Figo is manufactured by Ford’s plant in Chennai, India and is primarily sold in developing markets such as South America and India. In Mexico, the Figo is sold as the Ikon Hatch.

But what has us perplexed is why Ford is filing for the Figo trademark with the United States Patent and Trademark Office. To note, trademark laws and regulations are such that the only way in which The Blue Oval will be able to secure rights to the trademark is if it actually uses the Figo on a real-world product or service. This makes us wonder whether Ford is planning on bringing the Figo over to the U.S. as a rival to the Chevy Spark, Nissan Versa Note, Smart, and other low-cost city cars.

We’ll keep our proverbial ears to the ground.