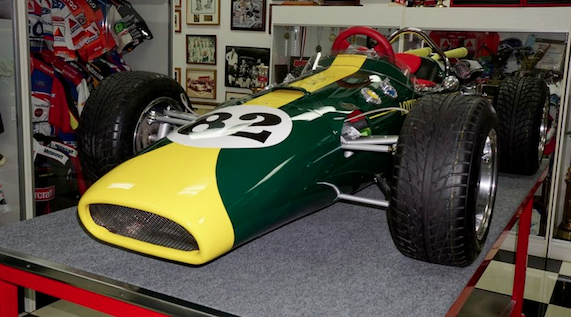 For the 1965 Indy 500, NASCAR’s Wood Brothers racing team was in charge of handling the pit stops for Scottish racing driver Jim Clark’s Ford-Lotus. Clark, who had narrowly missed out on victory in the 1963 and 1964 Indy 500, drove to victory that year, giving the Wood Brothers an idea of what it was like to win America’s most important motor race.

The 1965 Lotus Ford that put Clark and the Wood Brothers in victory lane obviously means a lot to them, but the real thing is owned by the Henry Ford Museum. Leonard Wood, who was apart of the winning 1965 pit crew, wanted to put the car on display at the Wood Brothers Museum in Stuart, Virginia, so he built a 5/8ths replica.

It started when Leonard, now 79, made a go-kart for a Ford Motor Company executive. The go-kart impressed his nephew, Eddie, so he got to work on another. After seeing the car run at the Goodwood Festival of Speed, Wood was inspired to recreate the Lotus-Ford he helped put in victory lane all those years ago.

As Fox Sports reports, Wood began crafting the Lotus from memory. But as the project began to come to life, he started to make it as accurate as possible, adding more and more detail to the go-kart. The result is an exact working replica of the Lotus-Ford. Wood says he even takes it for a spin around the Wood Brothers shop every now and then, which worries his nephews from time-to-time.

Check out the full story on Leonard Wood’s Lotus replica over on Fox Sports.