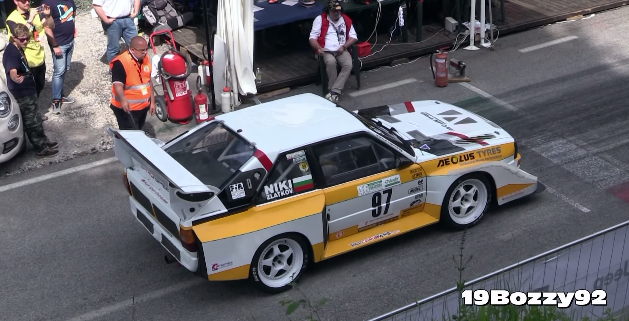 The Group B S1 Quattro helped Audi and its new all-wheel drive system rise to fame in the early 80s, and the car’s been treated like a god by car enthusiasts ever since. It’s hard not to like the S1 Quattro, with a 2.5-liter 500+ horsepower five-cylinder engine, the car won 23 Group B races over four years, and it looked and sounded great doing it.

YouTube user 19Bozzy92 recently caught a replica Group B S1 Quattro running at the Verzegnis Sella Chianzutan hill climb in Italy. This car is run and owned by Bulgarian race team Prospeed and is said to be producing over 770 horsepower. If we didn’t know any better, we’d say it was the real thing, as it’s also sporting a similar livery to the one the actual Group B S1 wore in Group B for a while.

Prospeed’s S1 may not be the real thing, but it goes and sounds just like it, so sit back and drink in the noises of the 1980’s legendary and unfortunately now defunct Group B rally series.