Gamer or no, you’ve undoubtedly heard of the “Halo” series of video games for Microsoft’s gaming consoles. Since its introduction late in 2001, it has become one of the most successful game franchises of all-time, spawning four chronological instalments and a host of off-shoots.

Well, there’s yet another Halo game set to release later this year, likely to be previewed at the 2015 Electronic Entertainment Expo (E3) in Los Angeles next week. To celebrate the event, Ford Motor Company, game developer 343 Industries, and vehicle customizing shop Galpin Auto Sports have partnered together to build this: the Ford F-150 Sandcat.

Starting with a 2015 model year truck, Galpin et al have created this Ford F-150 Sandcat to look distinctively like a military vehicle that one might find in the game. It’s finished in a matte green like that applied to all United Nations Space Command vehicles, rides on nubby offroad tires, and wears a few other appearance modifications. In the cab, there is an XBox One console, connected to two displays embedded into the front seat head rests.

But more importantly, this Ford F-150 Sandcat doesn’t just talk the talk; it walks the walk. It’s been given a thorough suspension reworking including FOX Racing shocks, Deaver leaf springs, and a Currie full floater rear axle. It has some gnarly sidesteps and a chase rack, to boot.

Want to buy a 2015 Ford F-150 Sandcat for yourself? Don’t hold your breath; this truck is a one-of-a-kind promotional vehicle that has about as much chance of reaching production as does Captain Keyes of rising from the dead, magically cured of his Flood-ness. Not to mention: no military vehicles in civilian hands, human. 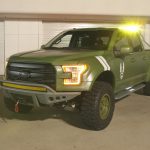 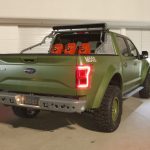 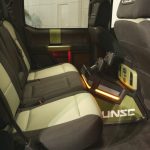 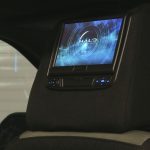