Okay, you may have a point: there’s very little practical reason to own a life-size mock-up of a Porsche 919 Hybrid. Its absence of a drivetrain means you can’t exactly take it to pick up Bobby from school, let alone tear it up at Virginia International, making it single-handedly one of the largest model cars you could ever own.

But what a model it is. Motor Authority reports that to raise money for charity organization SportsCares, Porsche Asia Pacific is auctioning off this 1:1 scale mock-up of the Porsche 919 Hybrid race car. The automaker has set up a web space for the charity auction, which is taking place on eBay, and will wrap-up at 9AM Eastern Time this Sunday.

Exactly 13 of these Porsche 919 Hybrid mock-ups have been built, all of them used by the German marque to conduct various studies. After any given race car’s development is completed, such mock-ups often go on display – but are rarely ever given to private owners.

According to the listing for this exquisite piece of Porsche 919 Hybrid art, the mock-up has working lights and a plug to power them, and weighs roughly 500 kg. It also wears the signature of every driver to participate in the Porsche LMP1 program last year: Timo Bernhard, Brendon Hartley, Mark Webber, Romain Dumas, Neel Jani, and Marc Lieb.

We wonder if a small block could be finessed in… 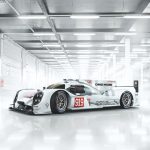 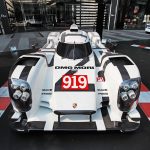 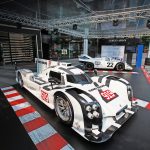 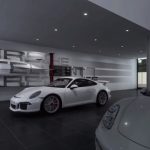 The Porsche 919 Hybrid mock-up can be wall-mounted.