Audi has set out to secure a Guinness World Record title for the greatest number of countries visited on single tank of fuel. The automaker will take an A6 TDI Ultra on journey that will attempt to cover 1,000 miles through at least 10 different European countries.

In collaboration with driving assistance firm RAC, Audi started the trek on June 9th. The A6 will first drive through the Netherlands, then through Belgium, Luxembourg, France, Switzerland, Lichtenstein, Austria, Germany, Italy, and finally into the Balkans.

Audi believes the A6 TDI Ultra is capable of securing the record thanks to its 19.3-gallon tank and high fuel economy from its 2.0-liter four-cylinder turbo-diesel engine. The oil burner is rated at over 67 MPG on the European scale. By contrast, Audi only offers the comparably larger and more powerful (and less fuel efficient) 3.0-liter turbo-diesel V6 in the U.S. which is rated at up to 30 MPG in combined city and highway diving.

The record-attempting journey was strategically planned in a way that avoids congested cities as well as highways and mountain roads. The entire trip could in at as little as 88 pounds ($135 by today’s conversions) on just a single tank of diesel. Automotive journalist Andrew Frankel and racing driver Rebecca Jackson will take turns hypermiling the A6. Those interested can follow #RecordRoadTrip on the social networks.

To note, this isn’t Audi’s first hypermiling rodeo, as the German automaker famously drove 834 miles on a single tank of diesel in an A3 TDI last year. 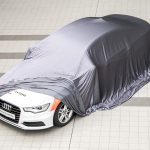 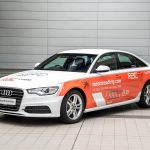 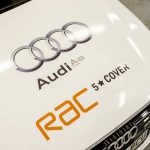