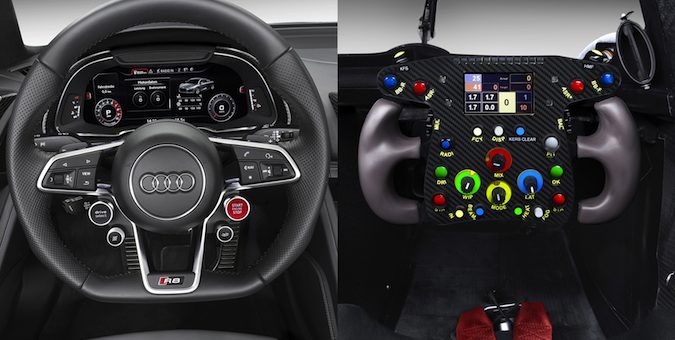 You might think the Audi R8 LMS Ultra GT3 car, which is set to race in its first-ever 24 Hours of Le Mans this weekend, shares very little in common with the 2016 R8 customers will soon be taking delivery of, but you’d be wrong. The DNA of the R8 is still very much present in the R8 LMS Ultra, and not just in its appearance.

Audi says the concept of the R8 LMS is “extremely close to that of a race car.” It has the same 5.2-liter V10 engine, although slightly modified for racing purposes, which leaves the same production line as the road car’s engine. In total, the road car shares about 50% of its parts with the race car, the latter receiving race-specific suspension, enhanced aerodynamics and a completely different cockpit, as seen above.

The interior is where things change dramatically for the R8 racecar, with a racing wheel with over 20 different controls being used. The wheel may look complicated, but it’s simple compared to the one used in the R18 e-tron Quattro LMP1 car, which boasts as many as 33 buttons. Both Audi race cars indicate their current RPMs through LED lights on the top of the steering wheel, however, and both wheels feature buttons used to adjust the car’s setup.

So when watching the R8 LMS Ultra GT3 take on the world’s best supercars during the 83rd running of the 24 Hours of Le Mans, remember, it’s not all that different from the car investment bankers and professional soccer players will be scooping up in droves.