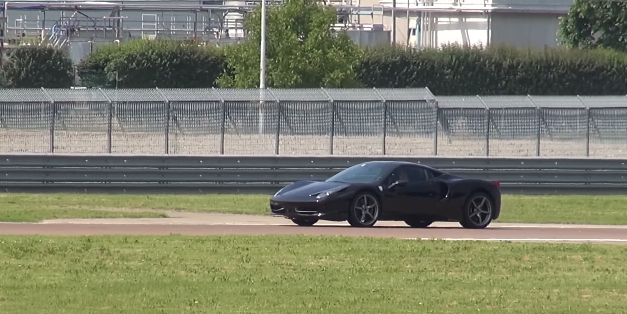 The Ferrari 488 GTB will be landing in customer hands shortly, but it appears the automaker’s test work on the new mid-engine supercar is still underway. A twin-turbocharged test mule based on the 458 Italia was recently filmed undergoing test laps at the automaker’s Fiorano circuit in Maranello, raising some questions as to what may in store for the brand beyond the 488.

We know this car is twin-turbocharged due to the slightly muffled sounding V8 engine note, so it probably has the 488’s 3.9-liter engine, or another mystery unit belonging to the F154 engine family. As with most test mules, it appears to be sporting different bits from Ferrari’s parts bin, including Speciale/488 exhausts and wheels, 458 bodywork and what appears to be a custom-made side intake.

It’s hard to say if this is merely test mule design for gathering data, or if it’s an allusion to a faster, more track-focused version of the 488. To be honest, we think it’s the former, as the 488 is simply a heavily reworked 458 and not the automaker’s all-new next generation mid-engine V8 supercar. The 488 probably won’t be around long enough for the automaker to produce a limited edition version, but we’ll have to wait and see to know for sure.

For now, feast your eyes and ears on this test mule in the video below, via YouTube’s NM225.