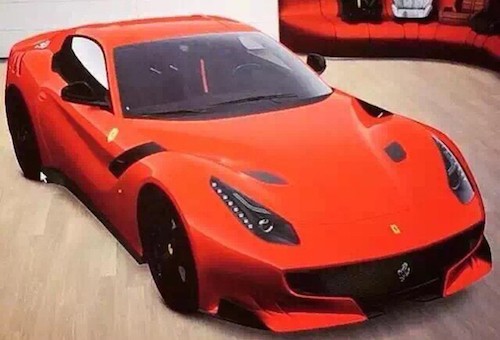 Ferrari has managed to keep details regarding the F12-based successor to the 599 GTO from surfacing, however the proverbial cat was let out of the bag entirely this weekend, with Dutch car spotting site Autogespot leaking images of the more hardcore V12 grand tourer.

The photos were reportedly sourced from Ferrari’s car configurator program, with access to the F12 GTO page currently being limited to Ferrari customers. Additionally, GTspirit learned the F12 GTO will debut at the Frankfurt Motor Show in September, with production to commence in the second quarter of 2016.

As expected, the F12 GTO will come equipped with the same 6.3-liter V12 engine found in the standard car, however output is said to entrench on the 800 horsepower mark. It’s unclear if some of the additional power will come from a HY-KERS system like that found in LaFerrari, though considering a KERS variation of the 599 GTO was introduced in concept form, we could see the F12 GTO utilizing such a system.

Additional information on the F12 GTO will become available following its reported debut at Frankfurt in September. For now, check out the leaked photos over on Autogespot.