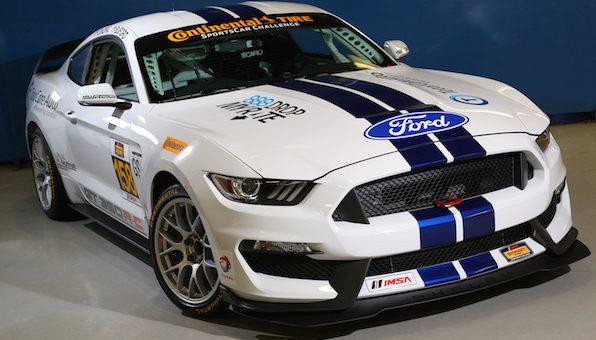 The racing version of the Shelby Mustang GT350R, dubbed GT350R-C (‘C’ for competition), will make its IMSA Continental Tire SportsCar Challenge debut at Watkins Glen this weekend, Ford has announced. The all-new sports racer will be fielded by Canada’s Multimatic Motorsports in the race series, the same outfit responsible for building and developing major aspects of the Ford GT supercar.

Just like the road car, the GT350R-C will pack a 5.2-liter flat plane crank V8 under its hood, the first production motor from Ford with a flat-plane crankshaft. Setting it apart from the car you’ll soon be able to buy at your local Ford dealer is a revised suspension setup with different spring rates and antiroll bars, a lower ride height, revised bushings and different cross-axis ball joints out front.

This weekend’s event at Watkins Glen isn’t Multimatic Motorsports’ first IMSA outing. The team fielded a Mustang Boss 302R in the series’ Grand Sport class last year, with driver Scott Maxwell finishing a solid fourth in the driver’s standings. This year, Maxwell returns in the GT350R-C and will be joined by Billy Johnson, Austin Cindric and Jade Buford.

“Ford is committed to the Continental Tire SportsCar Challenge and we’re very happy to be campaigning its product here,” Larry Holt, team principal of Multimatic Motorsports, said in a statement. “We like the endurance format, and the racing is always intense. Strategy plays a big role; the cars must be fast and reliable, and there are always at least 10 contenders running door-to-door for two and a half hours. It is the perfect home for the GT350R-C.”