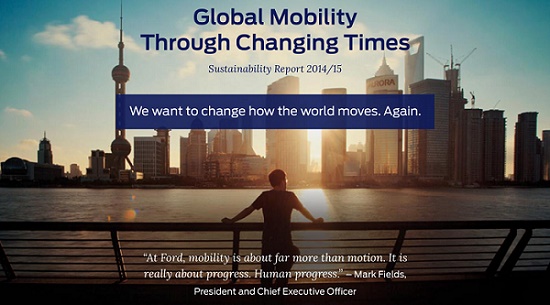 Ford has released its environmental sustainability report for 2014-2015, which it says highlights its achievement in “several environmental goals,” centered around reducing waste and its overall environmental impact.

Like many other automakers, Ford is concentrated on becoming landfill-free wherever it can. This past year the automaker was able to convert its Hermosillo Stamping and Assembly Plant to a landfill-free facility, joining its other sites in Cuautitlan and Chihuahua and making the company totally landfill-free at its Mexico manufacturing facilities.

“Ford is proud that all of its manufacturing facilities in Mexico are sending zero waste to landfills,” said said director of the Ford Environmental Quality Office, Andy Hobbs. “We are decreasing our global environmental footprint while maintaining world-class manufacturing systems.”

Also included in Ford’s sustainability report are its predictions for the future. The company says it is keeping an eye on topics such as urbanization and congestion, a growing middle class wanting to buy more vehicles, health concerns related to air quality and limited natural resources. It hopes to find answers to these issues through its Ford Smart Mobility initiative, a series of mobility-related experiments and innovative solutions to growing problems in the transportation industry.

“Our vision at Ford is to change the way the world moves – again,” said Ken Washington, Ford vice president, Research and Advanced Engineering. “It’s what Henry Ford did a century ago to create a better world, and we’re carrying on his legacy today.”

You can read more about Ford’s Smart Mobility Initiative here, and can also get a quick rundown on its 2014-15 sustainability report by tuning into the video below. For the full report, follow this link.