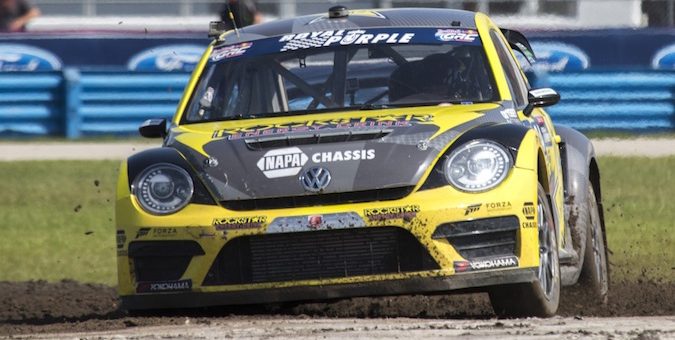 Volkswagen’s Tanner Foust and Ford’s Markus Eriksson each topped the podium in Red Bull Global Rallycross competition at Daytona this weekend, with Foust winning the double-header weekend ‘s first race Saturday and Eriksson driving to victory in the second on Sunday.

It didn’t look like Foust or VW were going to get a win Saturday after the American drove an average semi-final race and was forced to start from the second row on the grid for the final. However Patrick Sandell and Ken Block both wrecked on the first lap, allowing Foust and Ford driver Austin Dyne to easily drive by. Eriksson made a late-race bid for second but couldn’t hold off Dyne and ultimately ended up third behind Dyne and Foust.

Eriksson immediately got off to a strong start Sunday, winning the semi-final round with teammate Joni Wiman behind him in second. His job was made a bit easier after Foust made slight contact with him earlier in the race, damaging Foust’s car and putting him out of the race.

In the finals, Eriksson got off to an early lead an avoided the carnage behind him. Scott Speed fought hard with Steve Arpin and Ken block, while Foust, who made it into the finals following a dramatic last chance qualifier round, made a series of passes to move into third. Block eventually moved into second and put some space between him and the traffic behind, with Arpin taking third after an brief battle with former IndyCar driver Jeff Ward.

The Red Bull Global Rallycross series heads to North Carolina next, where they will race at Marine Corps Air Station New River, marking the first time a major league rallycross series has raced on an active military base. NBC Sports will carry the race live on July 5th from 5:00 p.m. ET.