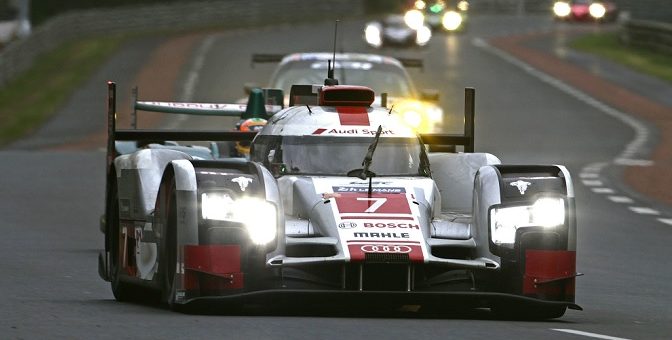 Sunday’s rainy Le Mans Test Day was a major inconvenience for many teams. The test day is used by most to collect tire data and help gauge how fast they are on which sections of the track, but the wet conditions made it impossible for teams to gather any valuable tire info. The result, according to Audi’s Alan McNish, is heaps of uncertainty from almost every LMP1 team set to lineup on the grid at La Sarthe in mid-June.

“No one got a good understanding of tyre life yesterday in the dry,” McNish told Motorsport. “It was difficult to read too much as everyone was out at different times in different conditions and they were changing lap to lap.”

McNish believes the lack of real tire data should help level the playing field in the LMP1 class. Teams don’t know how worn tires will affect their performance throughout the endurance race, and they are also uncertain how the tires will perform as temperatures fluctuate.

The test day was especially important for Audi, as they have been hard at work with Michelin over the winter. McNish says the team was “not the best” in keeping the R18’s rear tires performing well last year, and went back to the drawing board with Michelin to help remedy the issue.

“The work with Michelin over the winter has paid dividends,” McNish said. “A diesel powered LMP car is much different to a petrol engined car in terms of weight distribution and how much hybrid energy is working with the front tyres relative to the rears. So every area was looked at and some really good solutions found.”

Despite not being able to fully test the new tire compound, Audi confirmed they were faster through sections 1 and 2 at La Sarthe, two parts of the track which it struggled in last year.