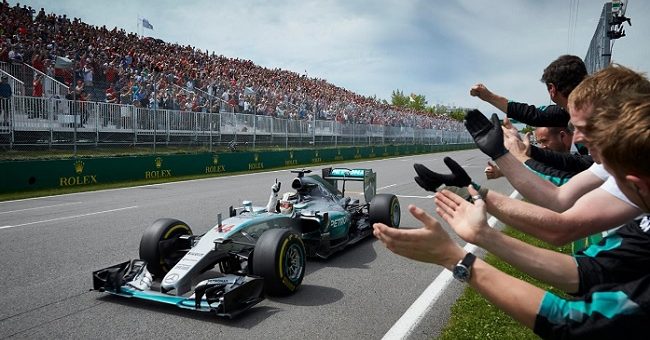 Lewis Hamilton has avenged his unfortunate loss to teammate Nico Rosberg in Monaco last week, winning the 2015 Canadian Grand Prix in Montreal after starting on pole. The Briton only lost the lead once while making his sole pit stop, but Rosberg didn’t let him off the hook easy, chasing him down as the laps wore on and at some points closing the gap to just 1 second.

Hamilton’s weekend started off strong when he posted a time of 1:14.393 in qualifying, putting him ahead of Rosberg for the start of Sunday’s race. It was his 44th pole position in his F1 career and good way to start the weekend off after essentially handing Rosberg the win in Monte Carlo the week prior. The three-time Canadian GP winner made good use of starting out front, too, jetting into the lead early on and carving a comfortable gap between his Mercedes and the rest of the field.

The opening laps of the race ran drama-free, however Kimi Raikonnen then spun on Lap 27, a mistake which eventually forced the Scuderia to fork over their potential podium position to Williams’ Valteri Bottas. Raikonnen was closing in on Bottas following both drivers’ pit stop, but he ran out of time before he could catch the Fin, giving Williams their first podium of 2015.

Elsewhere on the track, Sebastien Vettel was working his way through the field from his 18th place starting spot. After experiencing car trouble in qualifying Vettel worked his way around slower cars and drove to a fifth place finish. Felipe Massa was another potential front runner who started from the back and similarly worked his way up from 15th to sixth.

There were some surprises in store in Canada, including Lotus’ surprisingly strong showing. Both Pastor Maldonado and Romain Grosjean put their cars in the points, finishing seventh and tenth, respectively. McLaren, meanwhile, put on a particularly weak performance, retiring both Fernando Alonso and Jenson Button’s cars earlier after running especially slow all day.

In the end, Hamilton crossed the finish line 2.2 seconds ahead of Rosberg for the win. As a result, Hamilton has held onto his championship points lead for 2015, with Rosberg and Vettel in second and third.