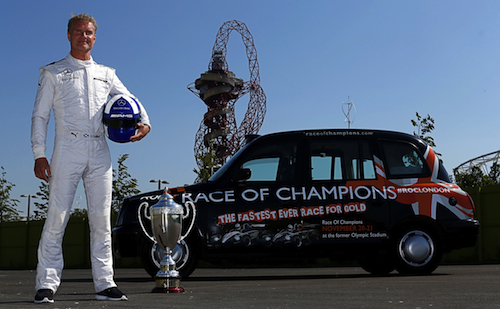 The Race of Champions is an annual event which sees some of the world’s best racing drivers pitted against each other on the world stage. It changes locations every couple years or so, and this year, it will be in the largest city of the country that lives and breathes motorsports, the United Kingdom.

With the festivities set to go down at the Queen Elizabeth Olympic Park, the home of the 2012 London Olympic and Paralympic Games, the 2015 ROC will be held in close proximity to thousands of car enthusiasts in the London area. As usual, the event will bring in some of the world’s greatest drivers from different motorsports series such as Formula 1, World Rally, Le Mans, Nascar, IndyCar and put them head-to-head in identical cars.

Defending ROC champion Dale Coulthard was on hand for event organizers to make the announcement at London’s Olympic park, posing with a London cab advertising the event in front of the venue. Coulthard said it is “fantastic that the Race Of Champions is coming to London,” and he’s sure this year’s event will be “be the best one so far.”