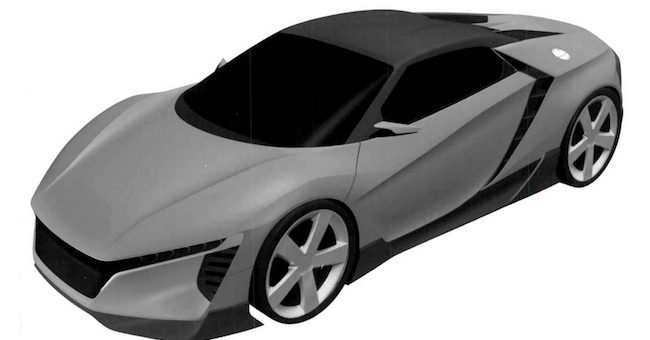 One of our favorite new cars is the Honda S660. With a small mid-mounted turbo engine, a six-speed manual transmission and a 45/55 weight balance, it looks like it would be an absolute blast to drive. New patent drawings indicate Honda may be coming at us with another sporty mid-engine model now, and it may be even cooler than the S660.

Dutch automotive website Autovisie dug up some patent drawings for a new Honda mid-engine sportscar. According to reports, the drawings show the planned successor to the Honda S2000 in concept form. Unsurprisingly, it looks like a wider and slightly longer S660, with an NSX-like front end and what could be a removable roadster-style roof.

Motor Authority believes this car will use the same 2.0-liter turbocharged four-cylinder engine found in the all-new Civic Type R, which will be linked up to an electric motor and 7-speed dual clutch transmission. Total output should be in the 350-365 horsepower range, which should make for a fun ride if sent to the rear wheels.

The concept seen in these drawings may be slated for a debut sometime later this year at the Frankfurt or Los Angeles motor shows, or in early to mid-2016 at Detroit or Geneva.