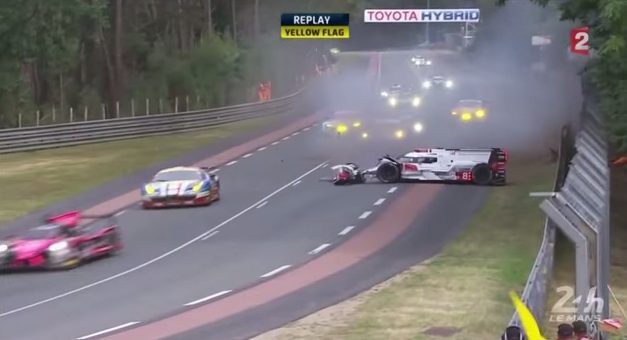 Audi may have fared a little better in the 83rd running of the 24 Hours of Le Mans if they had managed to stay out of the pits more often. Their first unscheduled pitstop came just four hours into the race, when Loic Duval, driver of the No. 8 R18 e-tron Quattro, lost control of his car and put it into the outside Armco barrier.

Duval was approaching Indianapolis corner at a high rate of speed just as a grouping of GTE cars had gotten caught up and were attempting to avoid eachother. As Duval closed in on them, he was forced to avoid them by turning onto the grass, which sent the No. 8 Audi spinning across the track before impacting the wall. The hit destroyed the R18’s front end, however it was able to return to the pits under its own power for repairs.

Once the car was in the pits, Audi worked their magic and showed the world why they are so successful at Le Mans. The teams’ mechanics had the car on jacks and in the garage in seconds, swapping the tires, making a few small suspension and brake fixes and switching out the nose and tail for new pieces. Amazingly, the team had the car back out in just over 3 minutes, re-entering the field barely one lap down.