Ever since Dr. Ferdinand Porsche penned the original Volkswagen Beetle (née “Type 1”) in the 1930s, he erased all doubt that the very name “Porsche” would stand for innovation. The Porsche marque does not follow the work of others; it leads.

For a while, we’ve been reporting on the automaker’s “Project: Future Sportscar” motorsport motto, and what that might entail. It started with an innocuous suggestion from Jalopnik that the turbocharged V4 engine found in the Porsche 919 Hybrid race car might trickle down into future offerings – as has been known to happen with Porsche powerplants. But that was little more than a daydream, based more on our desires than on any substantial empirical evidence.

And then, the “Porsche future sportscar” alluded to by the marque’s motto was teased in a series of photographs, released just after the first qualifying round of the 24 Hours of Le Mans, and we can’t stop our imaginations from running wild. Carscoops shared the photos, reminding us of the symbolic meaning of Porsche’s three 919 race cars and their respective colors; the red car alluded to Porsche’s motoring past, like the 917K which earned the marque its very first Le Mans win back in 1970. The black car represented the automaker’s present, wearing the same color as the 918 Spyder which broke the Nürburgring lap time record for production cars.

And then we get to the white 919 Hybrid. In a release from Porsche, it was suggested that white was selected simply because it’s a prevalent, significant shade from Germany’s motorsport history, but the third image from Porsche’s post-qualifying photo series suggests something else. It suggests that white is somehow symbolic of the future of the brand, and this oft alluded-to Porsche future sportscar about which we keep daydreaming.

So, we ask you; what’s under the sheet in that third image? Is the dramatic, race-inspired shape contained therein the form that this Porsche future sportscar will take? Or is it simply a stand-in for a car that’s not yet been designed – nor even dreamt?

We hope we learn the answer to this riddle soon enough, because we are missing out on some much needed sleep. 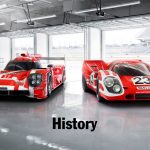 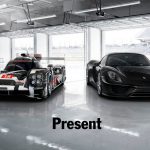 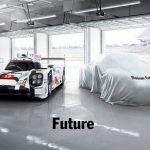