If you’ve never heard of McLaren Special Operations, do not panic; most likely, this is simply because you are a mere mortal, and like most mortals, you have a finite amount of money in the bank.

For those among us who are somewhat more endowed in the wallet region of the pelvis, McLaren Special Operations (MSO) is there to craft a special, bespoke example of any McLaren model on the market. And that’s how come Satan himself was able to commission this devilish red and black McLaren P1.

Motor Trend reports that sadly, Satan’s red and black McLaren P1 is destined for a customer in the UK; chances are, we’ll never get to see it in the flesh. Bright red splashes accentuate every recessed surface on the hood and doors, and run along the bottom edge of the front fascia and kicker panels in impossibly thin lines. That same shade is carried on to the back of this McLaren P1 along the edges of the roof structure, flowing into a pool of red beneath the rear window. Still more gaunt red lines decorate the rear of the car, while the interior of the car repeats this same black-punctuated-by-bright-red theme.

Ordinarily, we might call a car like this “garish.” The color combination of red and black has certainly been thoroughly explored in many a custom car. But while we certainly wouldn’t go so far as to call this particular McLaren P1 from MSO “tasteful,” one could, perhaps, at least get us to admit that it’s sharp. 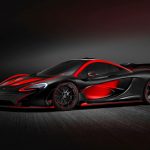 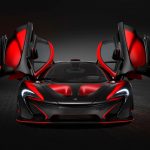 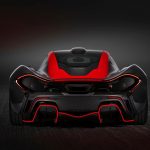 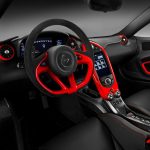