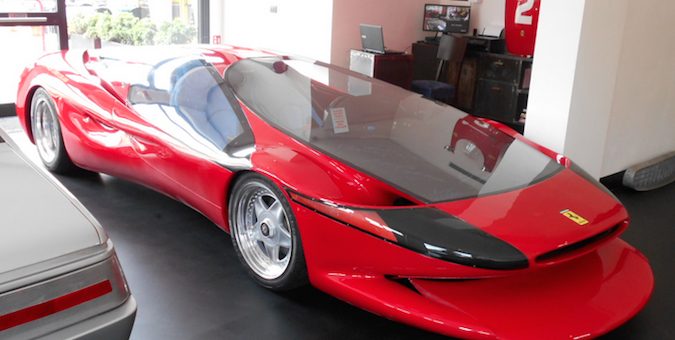 The majority of Ferraris are byproducts of the automaker’s Fiorano circuit, born and bred on the track for racing and performance enthusiasts, but that’s not what the one-off Testa D’Oro Colani is about. It’s something completely different, and for reasons other than its unmistakably 90s retro-futuristic bodywork and twin-turbocharged flat 12.

Currently for sale by Maranello-based Ferrari dealer Maranello Purasangue, the Testa D’Oro is the result of ideas brought forward by Industrial designer Luigi Colani. Wanting to build a car capable of breaking top speed records at the Bonneville Salt Flats, the German designer heavily reworked a Ferrari Testarossa with the help of Lotec and Ferrari itself.

The flat 12 cylinder Ferrari engine received two turbochargers, courtesy of German tuning company Lotec, and Colani designed a slippery aerodynamic body capable of cutting through the air easily at Bonneville. It’s not entirely clear if the body seen here is the one they used during their record setting outing to Utah, however photos show a much different looking car with presumably the same chassis and engine out on the salt.

The Testa D’Oro might be less significant had it not won its class at Bonneville and set a 218 mph top speed record, but its success on the salt flats gives it some racing pedigree, so it might not be so unlike other Ferraris after all. Maranello Purasangue wants $1.7 million for the car, and considering how much we’ve seen other rare Ferraris go for, we can see a collector coughing up that much cash for it in no time at all – despite what some may have to say about Colani’s bodywork.

Check out the listing here for addition information and photos.