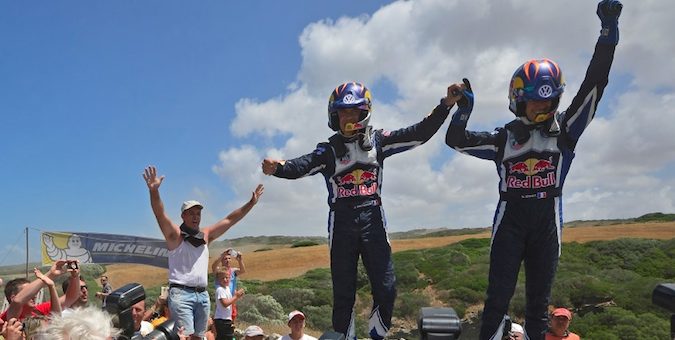 Volkswagen has strengthened its lead in the 2015 World Rally Championship after Sébastien Ogier and co-driver Julien Ingrassia piloted their Polo R WRC to victory at Rally Italy over the weekend. The win is Ogier’s and Ingrassia’s 21st with Volkswagen, the 28th of their WRC careers and their third consecutively at Rally Italy.

With their Rally Italy win, Ogier and Ingrassia extended their lead over Citroen driver Mads Ostberg to 66 points. Teammate Andreas Mikkelson, who was forced to retire early at Italy due to a broken suspension fitting, is currently third in the WRC drivers’ standings. VW’s third driver, Jari-Matti Latvala, was also unable to turn in a good result after suffering a puncture and damage suspension on Saturday. The duo worked hard to earn back the time lost, but could only manage to move into sixth place.

“Victory here on Sardinia was very important in our battle for the World Championship,” Ogier said. “We now have a large lead over the opposition. That was the most physically exhausting rally of the season so far. As such, I am overjoyed and proud of this success in Italy.”

The seventh leg of the 2015 World Rally Championship, LOTOS 72nd Rally Poland, will commence on July 2nd. Ogier is the defending champ in Poland and will be looking for his second consecutive win on the gravel roads of the Eastern European country.