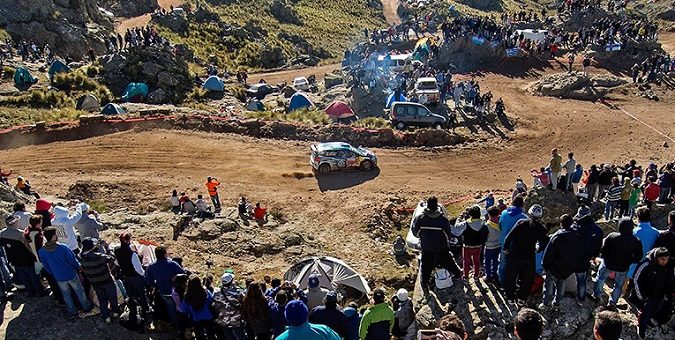 Volkswagen’s Sébastien Ogier and co-driver Julien Ingrassia are leading the World Rally Championship as the series heads to Sardinia for Rally Italy, the sixth round of the 2015 WRC season. Ogier’s next closest competitors in the points standings are fellow VW teammates Andreas Mikkelsen and Fløene and Jari-Matti Latvala and Miikka Anttila.

According to VW, Rally Italy “poses a major test for man and machine,” with notorious on-track features like ‘Micky’s Jump’. The rally will also play host to the longest day of rallying so far this year, with 212.83 of the race’s 394.63 kilometers being run on Saturday, June 13. The automaker is confident its trio of drivers can turn in a good result, though, with it coming fresh off a 1-2-3 finish in Portugal, its best-ever WRC result.

“You cannot go into a rally with more confidence than we have at the moment,” said Volkswagen’s Director of Motorsport Jost Capito. “The maximum points haul in Portugal has given us a real boost and all three drivers – Sébastien Ogier, Jari-Matti Latvala and Andreas Mikkelsen – all have what it takes to win in Italy. However, it will certainly not be a stroll in the park. The route conditions on Sardinia are difficult and change from one car to the next. On top of that you have the opposition, who will be more determined than ever to make our life difficult after the one-two-three in Portugal.”

Adding to the automaker’s faith for Rally Italy are its consecutive wins in 2013 and 2014. Ogier won the race in 2013, the same year he wowed spectators with his impressive air at Micky’s Jump, and followed it up with a second victory the following year. That same year the Frenchman and his co-driver, teammates and management celebrated by jumping into the harbor at lghero. Maybe if they win this year, they’ll jump in again and make it a tradition.