If you are as big a fan of Top Gear as we, you may recall an episode in which former host Jeremy Clarkson announced that accounting for the resources used in production, the Toyota Prius hybrid might do more harm than good in terms of sparing the environment from harmful pollutants.

We don’t know the source of that study, nor whether it was conducted using valid practices, but it turns out that when it comes to judging even so-called “pure” electric vehicles, it may not matter; a study by the National Bureau of Economic Research demonstrates that depending on location, we drivers might do less harm by driving conventional petrol-powered cars.

That’s before taking into account the environmental impact of electric vehicle production.

The Atlantic‘s CityLab blog has the full details, in a fascinating – albeit lengthy – article published last month. The short version is this: a majority of the country’s electricity is still produced by unrenewable means – usually coal – which, throughout certain parts of the country, results in more harmful emissions per-driven-mile in any given electric vehicle than by an equivalent gas-powered vehicle.

We won’t get into the nitty-gritty details of how the environmental cost-per-mile was computed for each type of vehicle, but CityLab reports that the economists were particularly interested in 5 types of pollutants: Carbon Dioxide (CO2), Sulfur Dioxide (SO2), Nitrogen (NOx), Fine Particulates (PM2.5), and Volatile Organic Compounds (VOCs). Eleven models of electric vehicle were considered, versus eleven “equivalent” conventional cars – i.e. the Ford Focus was compared with the Focus Electric.

From there, the economists calculated the quantities and estimated costs of each of the five considered pollutants, based on the EPA-estimated miles-per-gallon for conventional cars, and kWh-per-mile for electric vehicles. Since the electricity itself is clean, the economists used a pollutant profile for each of some 1,486 regional powerplants; if one knows how much pollution is created per plant, per kWh, one knows how much is demanded by each mile in a given electric vehicle. 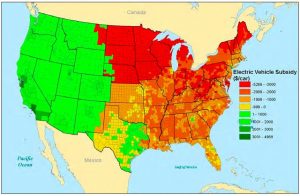 At the time of this writing, the federal government offers an incentive of $7,500 for every EV purchase; CityLab argues that this “blanket” national policy is problematic, failing to take into account the real impact of electric vehicles regionally. We see it, but would argue that the image could just as easily be taken as a color-coded map of where electric power plants need to be revamped or replaced.