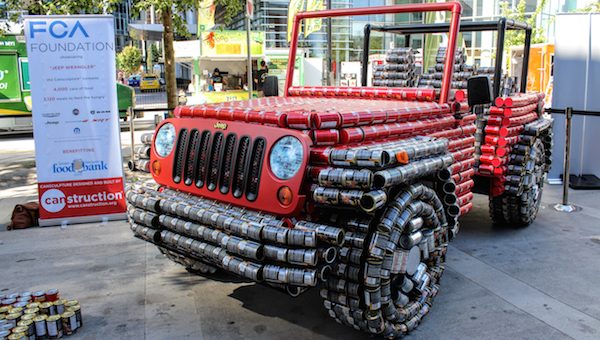 Fiat Chrysler Canada celebrated Canada Day by helping to raise awareness about poverty and hunger in the Greater Vancouver area. The automaker built a life-size Jeep Wrangler ‘canstruction’ out of 4,500 cans of food at Canada Place, which will later be donated to a local food bank providing 3,120 meals for underprivledged kids aged 12-18.

The Wrangler replica was built by international non-profit organization Canstruction, who assembled the temporary statue can by can. The project represents the third time FCA Canada has partnered with Canstruction Inc., with the duo also building a life-size Dodge Grand Caravan in Toronto‘s Dundas Square in 2013 and a full-size Ram pickup in Calgary in 2014.

Canstruction says they utilize “structures made out of full cans of food to capture public attention and raise awareness for hunger and poverty, along with STEM principal.” The Jeep replica took 12 hours to build and was on display on Canada Day from 10am to 6pm before being deconstructed and donated.