There’s a new touring car racing series coming to town – aptly named the Touring Car Racer International (TCR) series – and Volkswagen is taking a good, hard look at getting in on the action.

That’s why the German automaker has revealed this purpose-built Volkswagen Golf Touring Car concept, looking the part entirely with its… well, everything.

Road & Track reports that the Volkswagen Golf Touring Car has a chassis that’s been widened by a mammoth 400 mm (15.75 inches) over the production car. While that was a move necessitated by the increase in wheel width both front and rear, that should also boost the car’s stability some.

Meanwhile, a behemoth caricature of a wing hangs off the rear of the car, and you can hardly swing a dead cat inside the cockpit without hitting roll cage. Everything else about the inside of this Volkswagen Golf Touring Car is unrecognizable, too, from the absence of carpeting and sound-deadening, to the single, sport-design bucket seat, to the utter lack of anything remotely pretty or pleasing to look at.

Meanwhile, the automaker is denying that any part of this Volkswagen Golf race car concept is borrowed from the GTI – it’s just a plain old Golf. Save for the 330 HP turbocharged four-cylinder; that’s been lent by the Golf R. But to VW’s credit, it does only send power to the front wheels, just like a Golf.

For the time being, this Volkswagen Golf TCR is only a concept. If it gets the green light, however, it’ll likely make its way to the hands of customer racing teams by 2016. 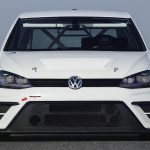 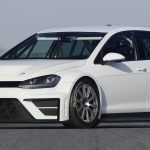 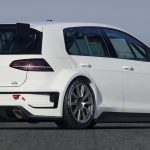 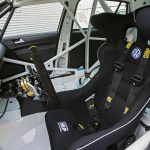